Dumbledore in The Sorcerer’s Stone – “Ah, music,” he said, wiping his eyes. “A magic beyond all we do here!” The magic that heals every pain and sorrow. I can’t imagine how the world would stand together if it weren’t for the music. Every part of the music tells a story that relates to our inner voice. How does it feel when the music hits your nerves? The amazing feeling can be found nowhere.

Here are the latest weekly reviews of the most trending music videos on ListenOnRepeat. Enjoy!

“Stay Tonight” is sure to hit 10 million views in its first 10 days of its release, making it a mega-hit, as opposed to just a hit, on par with the giants of American pop who are considered international superstars. Yet how many people who are not knee-deep in the world of K-pop will have heard of Chung Ha? BTS, fair enough, BlackPink, OK, but Chung Ha … the truth is there are dozens of massive K-pop acts that have not yet reached Western common knowledge despite their huge popularity in Asia. It is a testament to the size of the K-pop market, which shows absolutely no signs of slowing down, that they exist.

For those who are not yet in the know, Chung Ha (김청하) is better known mononymously as ChungHa. She is an actress, singer, dancer, and choreographer, and like so many of the K-pop acts, she got her rise thanks to a talent show that seeks to pluck talented people from Seoul (usually) and place them within groups that have considerable corporate backing and limitless marketing power. Her show of choice was I.O.I. and it was assembled courtesy of the show Produce 101 – a name that spells out exactly what these shows set out to do from a professional standpoint. In 2017, once her group disbanded, ChungHa set out on a solo career.

“Stay Tonight” is a full-throttle and beautifully choreographed piece, that combines both Korean and English in the lyrics with “don’t cha’s” embedded within the verses. Multiple sets and costumes are utilized throughout and the pace is kept up for the entire performance. It is the kind of track you could imagine being used as the background noise for a high-class fashion shoot, one that wants to buck trends and get the audience moving. 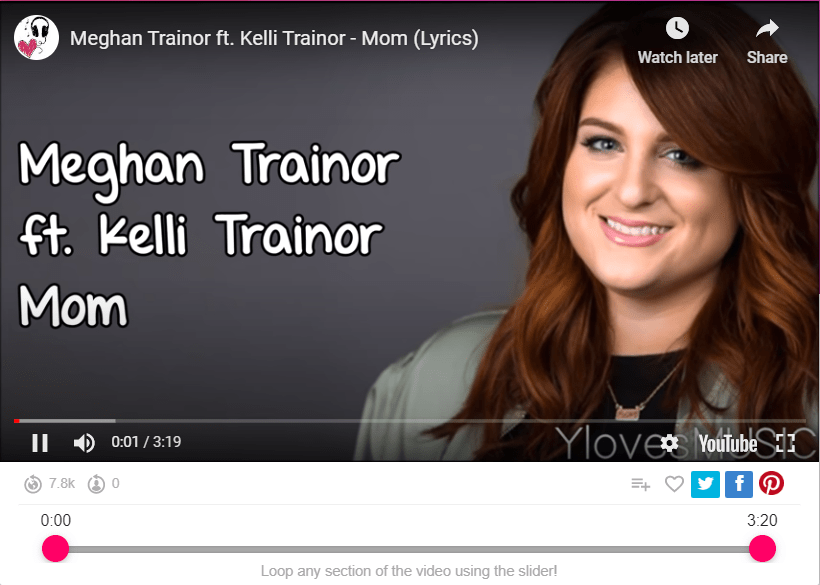 Mother’s day came round again and, among other things, that means the resurgence of “Mom,” a song that has been infinitely tied to a date in the calendar, like Christmas tracks, resurfacing once more when the time is right. Meghan Trainor was at the peak of her powers when the song was released in 2016, with her super smash hit “All About That Bass” and the accompanying album Title coming out in 2014, and the international touring that followed throughout 2015.

Though “Mom” perhaps got lost in all the noise, it is a track that has gained a loyal audience over time, and that can be seen by comments sections for its various video versions: “Best Mother’s Day song!!!!!” … “Who else is here on mothers day like if you are this is awesome!” Indeed, it is sitting in the top 5 of iTunes charts right now and the buzz was perhaps stronger than in previous years.

For the track, Meghan Trainor made the point of featuring her mother, Kelli Trainor, who we can hear having a phone conversation with her daughter in the background. In the foreground, Meghan makes the point of distinguishing her Mom from all the others: “you might have a Mom, she might be the bomb/ but ain’t’ nobody got a Mom like mine.”

The reason for this lies at the heart of Meghan Trainor’s central message in most of her more popular songs. Though looked at from different angles, many of them revolve around self-image and self-esteem, with “All About That Bass” has become an international anthem for self-love in its own way.

Who is behind all this positivity? Well, according to Meghan, it is her Mom. “She taught me to love myself,” Meghan states, and later town the line, Meghan’s music has been helping her fans do the same thing. 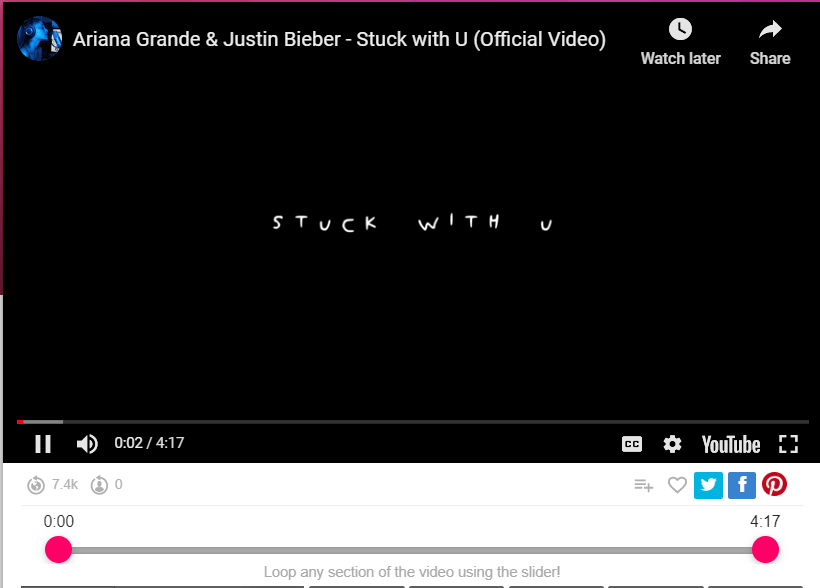 While many lockdown songs, especially on the country scene, have focused on what we are missing during this time of international shut down, this one has a slightly different slant. It isn’t about the trees or the birds, or the open spaces, the friends, the evenings out, the travel … instead, it centers around what we have in front of us, on what we are able to take advantage of.

Ariana Grande, who has been more impressive in the last couple of years than many people will have given her credit for, opens the song with some lyrics that we aren’t used to hearing right now – “I could stay here for a lifetime.” Her meaning is simple: canceled plans and lonely moments are annoying at first, but they do come with a silver lining.

Firstly, we have all this time on our hands to develop ourselves. But secondly, and more importantly, those who are lucky enough to be self-isolating with a loved one are being given the opportunity to spend real, sustained quality time with them. Though many couples might find that idea crazy, in the world of “Stuck With U” it means slow-dancing in the kitchen while candles burn on the table behind you.

One of the couples that shows off this particular move is featured artist Justin Bieber, and his wife Hailey Rhode Bieber. They are joined by dozens of fans who film themselves enjoying time in lockdown in what must be the best-executed home-made music video yet. Celebrity partakers are aplenty, including Gwyneth Paltrow, Jaden Smith, Chance the Rapper, and many more.

Both Bieber and Grande are impressive, and they deliver a fun and balanced tone in this romantic, wholesome pop release. Grande will have made fans wonder who her mystery man is at the end of the video, who comes in to replace the dog that she hugs for the first part. 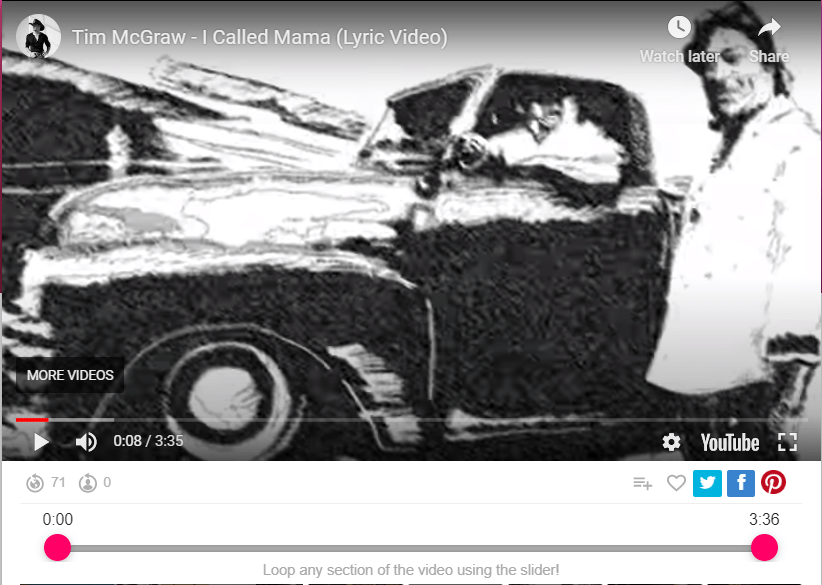 “I was a mother’s day present from me to my mom in a lot of ways,” Tim McGraw said in a recent home-made video talking about his new track. “I Called Mama.” Indeed, the cover of the single is an image of his mother at the end of high school, just before she fell pregnant with the singer, and the lyrics speak for themselves.

This is McGaw’s first release of 2020 and it also marks the first new music from the country stalwart since he returned to Big Machine Records, a company he had previously worked with on releases like Two Lanes of Freedom, Sundown Heaven Town, and Damn Country Music. For this one, he teamed up with songwriters Lance Miller, Marv Green, and Jimmy Yeary, but the track seems very personal to McGraw and his experience despite the involvement of other creatives.

One of the reasons for this is the video. We begin with a grainy black and white screen that sets the tone. McGraw drives a pickup truck around town as the lyrics appear, sketched and trembling, on the side of his vehicle. He tells us a story of losing a friend, just before he was meant to be entering his best years. This sudden and terrible news puts everything suddenly into perspective, and from then on the song, and its singer, are focused on what’s truly important.

As he picks up the phone and calls his mom, her image appears on the screen. A pensive guitar jangles in the background and McGraw’s voice strikes the perfect note: this is about appreciating the present moment and about not getting caught up in things that just don’t matter when all is said and done.

The song carries its meaning well and it leaves the listener affected by the end. “I hope people connect to it in that way, and more than anything, I hope moms appreciate it,” McGraw stated.