Leonard Cohan once said, “There is a crack in everything, that’s how the light gets in”. You may listen to the music of happiness and joy but sometimes certain music will break you into tears. The music goes right through the crack and hits in the heart. Listen to your favorite songs on ListenOnRepeat. Here is the weekly roundup of new reviews of the most trending songs from last week. Take a look! 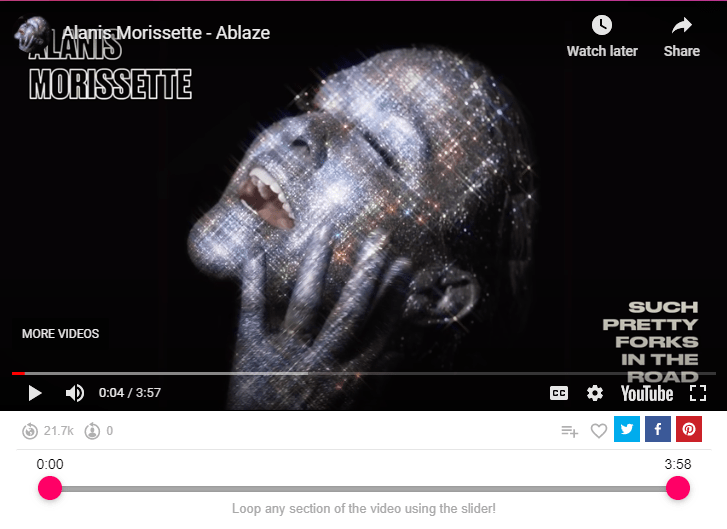 The return of Alanis Morissette, who most will know from her incredible breakthrough debut Jagged Little Pill, which she released to acclaim back in 1995. Next year she will head out on a tour of her new album, Such Pretty Forks in the Road, which will delight fans. Fingers crossed artists are able to have complete freedom in their tours when the time comes.

She debuted “Ablaze,” from her new LP, as a musical guest on a recent episode of The Tonight Show Starring Jimmy Fallon! Due to social distancing measures, this was a remote performance, but it felt extra special for fans of Alanis because she sang with her daughter in her arms. Alanis responded to her questions about the lyrics in between singing, and even let her join in. It was a lovely moment.

“Ablaze” is a saga of a track, taking us back to the Garden of Eden, the snake, and the tear in life’s fabric that occurred all those years ago in bible passages. What follows is a conflict caused by original sin, which Morissette uses to explain all of the different wrongs we commit on a daily basis. But, as the lyrics remind us, we are all ultimately made up of the same stuff, and that is what counts, despite our faults.

Later in the song she addresses her family, and her kids. There is one lovely passage that goes like this: “To my boy, my precious gentle warrior/ To your sweetness and your strength in exploring/ May this bond stays with you through all your days/ My mission is to keep the light in your eyes ablaze.” It is beautiful stuff and Alanis sings with passion and power throughout. She is back, don’t you know, and fans can’t contain themselves. 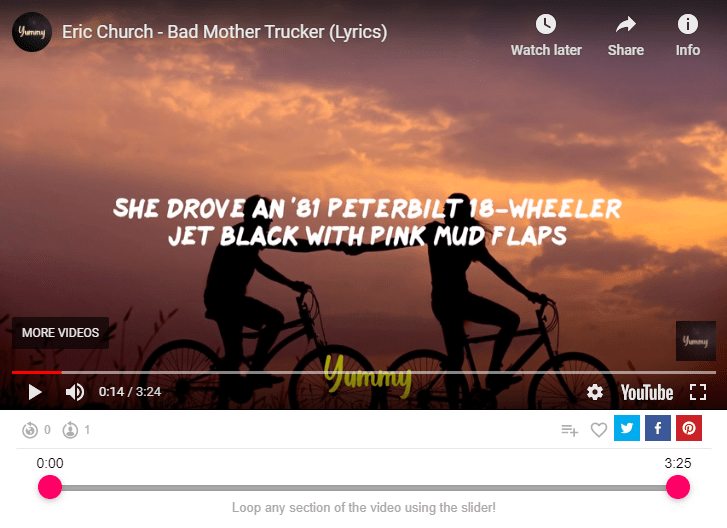 The title of this song is about as provocative as a country song is gonna get. Yep, fans are going to click on this one fast, not least because Eric Church is an artist with a significant fanbase, but because that fanbase isn’t used to skating so close to the edge.

Throughout the track, it isn’t clear whether the Church is talking about a truck or a woman, or both. Indeed, he uses the pronoun ‘she,’ which we usually associate with ships when applied to inanimate objects. Yet, trucks and guns are so dear to the American South that it wouldn’t be a stretch to imagine them getting personified either.

Musically, the track does some interesting things beyond the normal country remit. For example, the backing vocals are reminiscent of funk and soul, while the acoustic guitar and the shuffle beat sounds more like acoustic folk. Then, we get electric guitars and colorful piano chords that drag us into rock territory, along with a chorus whose vocals are raised and energetic, sounding different to country norms. We even get a guitar solo, with Church saying “that’s bad,” in-between riffs.

Fans seem to agree: “With the guitar solos and Joanna’s background vocals, it has a band feel that you don’t get with Luke Bryan or Blake Shelton” (big country stars). But what stands out most is the tone of the Church’s voice. Indeed, he has a deep, rich, and playful tone, that sounds like a slug of bourbon as fans are keen on pointing out.

Whether or not you appreciate the humor, you can’t deny the energy in the performance or respect the Church’s willingness to take his country pedigree and stretch it into new territories. 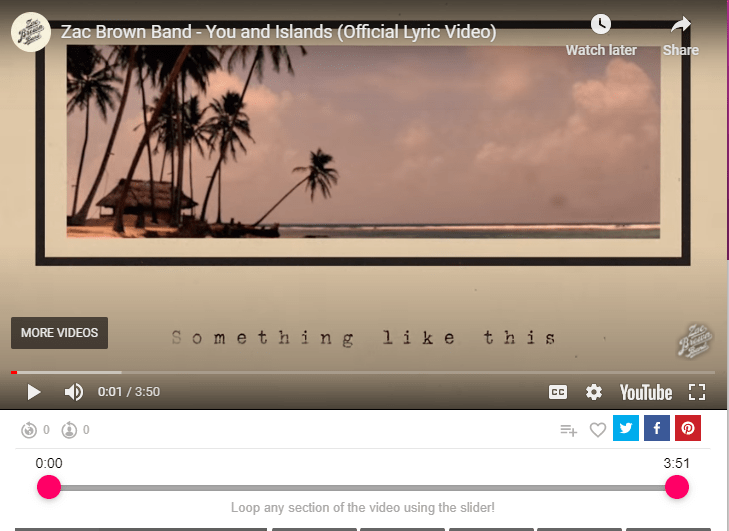 The Zac Brown Band has given us a nice summer track just in time for de-confinement. Indeed, “You And Islands” has everything you would want from a summer song: nice, laid-back acoustic guitar, a quick-paced and smooth beat, a nice rounded tone, and lyrics that speak of all the iconography you would expect – sand, sea, lovers, etc. You can imagine it being played at BBQs just as easily as you can imagine it blaring through the speakers of road-trip vehicles.

It is also a song that follows many of the common themes we have been hearing during this tricky time, especially in country music. For example, artists have been evoking nature a lot more than normal, bringing out that yearning for lusciousness and open space that everybody felt whilst locked inside. Now that we are out, artists are able to describe spending time in nature without having to resort to flashback, or to forward projections, to do so.

And yet, “You And Islands” does exactly that. It describes a memory that is full of nostalgia and romance. The speaker of the track imagines being back with “you and islands,” on a getaway that has marked him and still remains important to him today. Wherever that place was, it was somewhere where everything was going to be OK.

“Last night I had a dream, we were in quarantine” is another interesting lyric in the song. It takes the hypothetical idea of quarantine, and discuss how awful it must be, before contrasting that with the magical blue horizon of the islands where they find themselves. It is clear that the song is meant to comfort people, as we stand on the verge of a second wave, and another lockdown. The band released the following statement: “Everything will be alright. “You and Islands” is available everywhere now!” 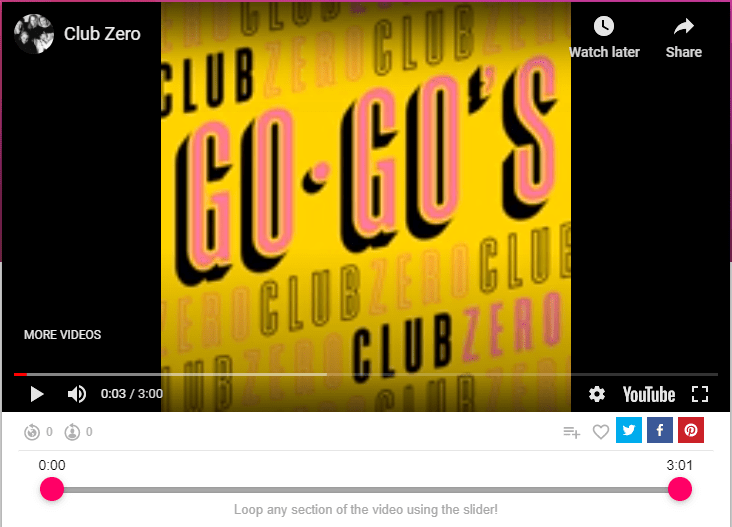 One of the top comments for “Club Zero” by the GoGos does a better job of providing information than must publications will: “I absolutely LOVE The Go-Go’s (Belinda Carlisle, Charlotte Caffey, Jane Wiedlin, Kathy Valentine and Gina Schock), and the new single “Club Zero” is absolutely DIVINE! Awesome music Go-Go’s!” There are also comments about how the Go-Gos have saved 2020, and about how they are loved by so many fans all over the world.

Interestingly, they certainly don’t fit into the dominant pop landscape. Though they claim to be the “new MVPs of the 20th century,” they have a sound that harks back to the 80s and 90s, where pop, punk, and grunge were merging and blurring together into a sound that was only very slightly dysfunctional and irreverent, despite sporting all the signs and looks you’d expect from that kind of behavior.

Indeed, they were originally formed back in 1978 in California and this comeback has been very well received by fans who still get a kick out of their sound. Yet younger listeners might struggle – despite the protest tone and the insolent vibes, the GoG-os aren’t really here to cause a scene: “Hey, we’ve got something to say” is a standard chorus line … what they have to say never ends up being said.

Yet, there is something undeniably interesting about this group – you’ll want to listen to them again and again, perhaps because they are reminiscent of times we now see through rose-tinted glasses, perhaps just because their sound is catchy as anything. They still have the bite, still have the style, and those slightly raised, soprano vocals batched to rolling bass-lines and frantic drums … it is still a winning mix.