Weekly Roundup of ListenOnRepeat New Reviews for Apr 13 to Apr 19, 2020

A bird does not sing because it has an answer. It sings because it has a song. The Coronavirus has affected millions of lives. In this time of distress, help yourself with the sound of music to find the inner peace in you. Listen to your favorite artists and their releases inside your door and keep calm. Here is the new weekly roundup of ListenOnRepeat’s reviews for Apr 13 to Apr 19, 2020. 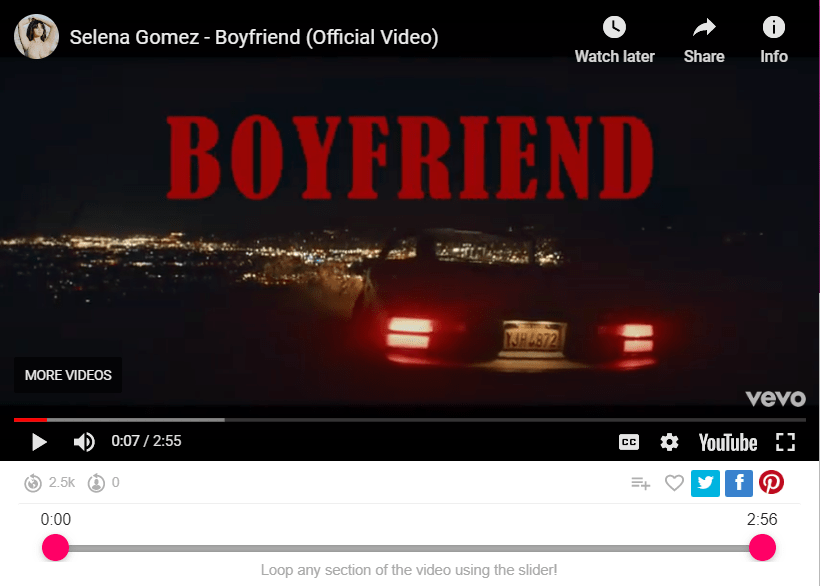 As Selena Gomez drives through the night with sunglasses on, a headscarf blowing in the wind and a cage full of toads jerking in the trunk, we are likely to suppose we are seeing something new from her. After a recent album with very consistent central themes – breakup, heartbreak, and rebirth – this strange scene seems to promise something different.

Yet, a glance at the song’s title suggests the exact opposite. “Boyfriend” is exactly the song title that listeners would expect, and perhaps groan at if they are not as caught up in the Justin Bieber saga as some die-hard fans.

However, the track’s title belies a new direction. Rather than looking back, Selena’s new song has forward momentum and freshness that suggests welcome new horizons, both apparently for private life and in terms of her songwriting.

She pulls up and steps out of the car, a pair of toads falling onto the tarmac next to her high heels and a moody, prodding synth counterbalanced by the raspy soprano of her vocals. She then proceeds to walk through a warehouse and into a backroom poker game where she takes a bottle of glistening liquid from the table.

What follows is a series of dates in bars – standing, sitting, laughing, sulking, bored, exasperated – where she meets and then mentally discards several different men. As she takes the special bottle from her bag and begins to drug her dates, the viewer is liable to guess what is going on.

It is a cruel twist on the fairytale adage: the one about kissing the frog in order to turn it into a prince. With each prospective boyfriend dismissed as a lowly amphibian, Gomez’ road to true love still feels fraught with difficulty, and just a touch of bitterness. Still, fans will be happy to see her moving forward, boyfriend’s consigned to a cage in the back, thus rendered powerless.

Joe Exotic – I Saw A Tiger 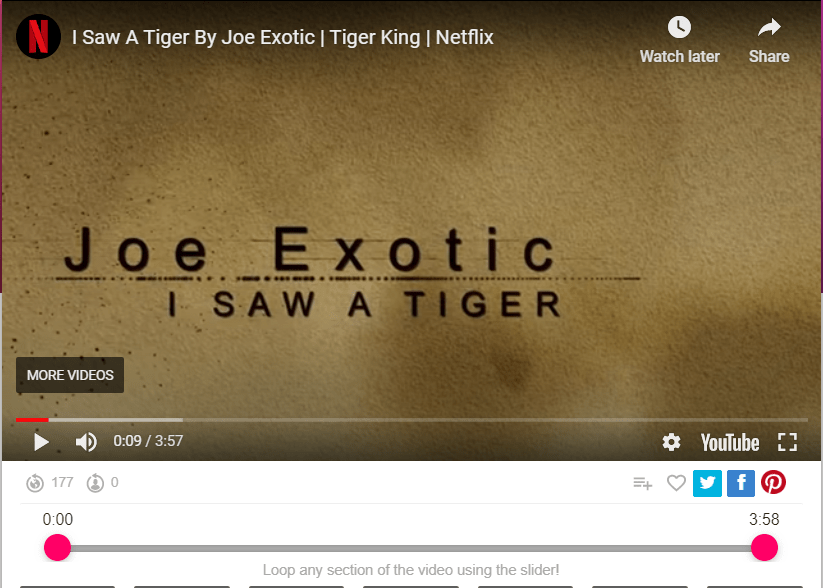 The unlikeliest of world stars – Joe Exotic had been courting fame for his whole life. The so-called Tiger King, zookeeper of a site in Oklahoma that housed nearly 200 fully-grown tigers, has only recently managed to achieve the levels of recognition that he always craved.

He ran for president, then for governor, and even invited film producer into his crazy big-cat world in order to make a reality show starring himself. But unfortunately for him, his fame has come as at a time where he is locked up in jail in what was one of many twists and turns in a Netflix series that has taken the world by storm.

He was convicted for offering to pay a hitman to bump off his nemesis, Carole Baskin, whose more confusing love for big cats saw her on the “animal rights” side of a community’s obsession with endangered wildlife.

But an odd off-shoot of this whole debacle, which has since turned into a phenomenon, is the music that played a part. In more obscure days, Joe Exotic would make music videos on his own estate, playing the part he always played: himself. He was the gay cowboy with a blonde mullet, strumming a guitar whilst standing on a jeep and petting baby tigers in the long grass.

He sang about an accusation made against Carole Baskin, that she killed her millionaire husband and fed his body to her tigers, and he also sang about his relationship to the big cats he kept. “I Saw Tiger” was the result, and it has since become an emblem of the show.

But here, as is always the case with Joe Exotic, truth and lies seem to blend into one. Viewers were probably impressed by his voice when they first heard it. Turns out, it’s not him singing, but rather a professional, whose voice Joe has co-opted as his own. As such, the song encapsulates his character even more perfectly.

Watch I Saw A Tiger By Joe Exotic

Lee Brice – One of Them Girls 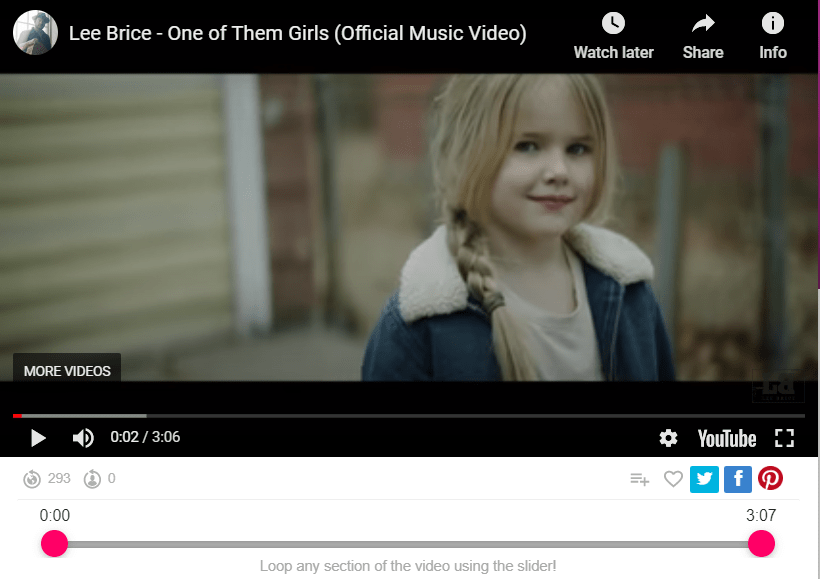 Lee Brice is a country music singer-songwriter who is just flirting around the edges of super stardom. Yet, he has been in the industry for a lot longer that people will imagine, having begun writing hits for other country stars like Garth Brooks back in 2007. In fact, “More Than A Memory” was a song penned by Brice for Brooks, and it is the only song to ever debut as number one on the country charts. Since then Brice has delivered four studio albums of his own, with his 2010 release, Love Like Crazy, breaking records and capturing the country zeitgeist for that year.

With “One of Them Girls,” a title the Brice likes for the different meanings it might contain, he has been paying tribute to the type of fiery woman who lives for the moment, and controls her own destiny, without caring what other people think of her. She does shots, wins on the pool table, refuses to dance, plays hard to get, and keeps her heart on lockdown, waiting for someone with enough resolve to break down the defences, knowing that there is a large amount of passion to be unlocked.

But with “One of Them Girls,” Brice is also paying tribute to society’s servants, especially at a difficult time like this. “The video says a lot.  It’s a strong woman,” Brice revealed. “It’s a single mother in the video, so it even takes the song to another level. She’s also a firefighter, so she is a first responder. And there’s a thing about that kind of girl that all us boys are really looking for at heart.” Deep down, society’s needs are the same as men’s needs in Brice’s world: both are dependant on strong women.

Watch Lee Brice – One of Them Girls

twenty one pilots – Level of Concern 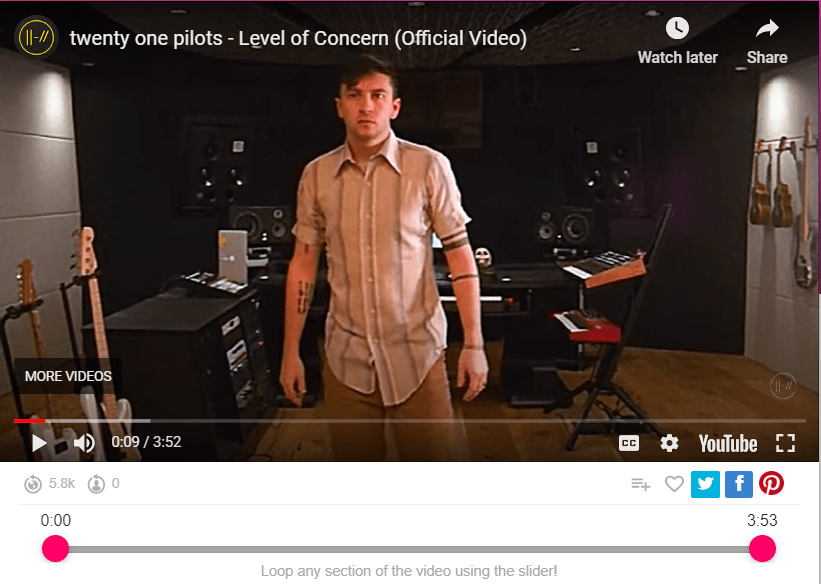 If there was any doubt that twenty one pilots where an international force to be reckoned with, this latest release should put them to bed. “Level Of Concern” has racked up nearly 10 million views on Youtube in its first 48 hours, and it is racing to the top of all charts and all platforms …

… and all of that at a time when most of the world is confined to their own houses. Let’s be clear: “Level of Concern,” though probably somewhat conceived before lockdown, has been created during this difficult period, as a very current reflection of what is going down.

The lyrics of the chorus demonstrate this, if it wasn’t already clear before: “would you be, my little quarantine, or is this the way it ends” … the context to these words is the breakdown of a relationship, one that has now been thrust into even deeper confusion due to the virus’ outbreak.

Will they stay together? Are they going be ok, despite not being able to see each other? All the speaker of the song needs is for her to tell him it’s all going to work out fine for him to feel a whole lot better about the whole situation, both on personal and global levels.

Our smaller problems can often outweigh larger and more uncontrollable phenomena after all, and songs like this seek to provide soothing respite, a distraction against the sweeping, pervasive distress signal.

Shot in a home-made fashion, with both artists in the duo ostensibly living separately, the song’s release also displays another fact of where we’re at. Now that enough time has passed, real art is starting to get made – a full song and music video that is good enough to blast its way through the charts, despite the odd circumstances surrounding its creation.

John Prine – Hello In There

The Coronavirus has been hitting the music world hard in the last couple of weeks, with the deaths of several legends across different genres throwing the world into mourning. Ellis Marsalis Jr, a pioneer of the jazz piano from New Orleans, and Manu Dibango, a giant of African music whose hit “Soul Makossa” remains one of the greatest funk jams of all time, are among those we have lost.

The latest veteran artist who has bid us farewell is John Prine, an American country-folk singer who will surely go down as one of the best songwriters of his generation. His praises have been sung by the likes of Bob Dylan and Bruce Springsteen since his passing.

When picking a song to remember him by, fans are spoilt for choice. In fact, a whole album wouldn’t be enough to cover his many masterpieces. But the piece chosen by many has been “Hello In There,” a song about ageing, and about how things change organically with the passing of time.

It is full to the brim with pathos, and Prine’s famous raspy tone carries a romanticism that the listener can’t help but swoon along to. Truly, it is the kind of track that puts people in a frame of mind where everything – life, death, the universe – seems suddenly fixed in a new perspective, one of understanding and calm rather than chaos.

We are mostly only hearing Prine and an acoustic guitar, yet the song is as sophisticated as it gets. Prine’s lyrics are equally simple, telling stories of life and of relationships in quite a matter-of-fact way, just before he hits you with an emotional punchline that will stay with you long after the song finishes.

“Hello In There” also entreats the listener to connect with older folk, to reach out in case they are lonely. At a time where our older populations are increasingly vulnerable, the song takes on an even more poignant note.

Watch John Prine – Hello In There