Taylor Swift has won the top prize at American Music Awards. However, she missed the show as she was re-recording her songs. She announced in a video that she is re-recording all her old songs at the studio where they were originally recorded. Hope we will get to hear new versions of good ol’ songs from swift soon.

FINNEAS – Where The Poison Is (Official Audio) 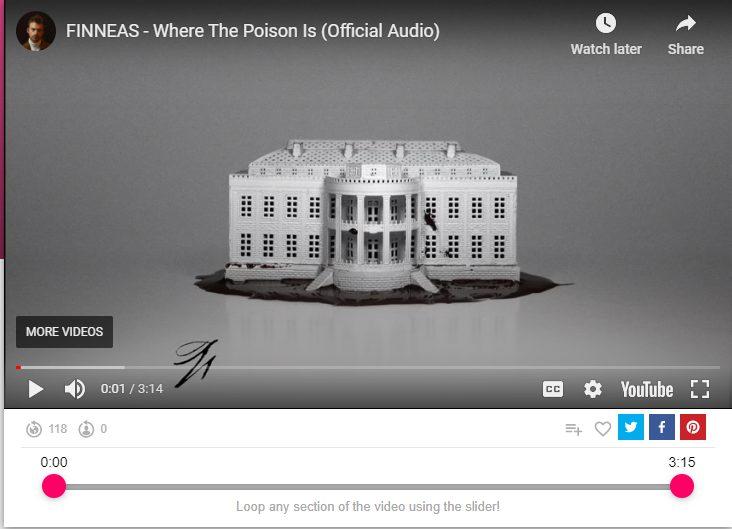 “Where The Poison Is” begins like a Fleet Foxes song: soft, drawn-out harmonies reverberate in a space with just a touch of echo. Minimalist production provides a base. Yet, after the first minute or so, the track takes a turn and becomes something quite different. It becomes moodier, with dirty drums merging with jerky bass, and the vocals drop right down. An odd electric keyboard takes center stage, adding a dash of darkness to proceedings. As it turns out, this is far from effect for effect’s sake – the track is a microcosm describing the state of The Whitehouse right now.

After all, we should expect music with a little deranged energy from FINNEAS, the brother of Billie Eilish and her producer. In many ways, he has been the architect of her sound, and together they have helped reduce strict melody and reintroduce emo to the pop world, though it is way more nuanced and textured than before.

From the lyrics of the track, the message is pretty clear: “Take me to the place where the poison is/ To put a face to what’s poisonous/ To give him a little taste of his medicine/ There’s a snake that thinks it’s the President.” Indeed, FINNEAS directs his voice directly towards Trump, who is still cloistered in the White House after his election loss. The track also speaks about how the recent past felt good, how we were going in the right direction, and how it all feels so different now.

Comments sections are full of people reiterating the message of the song, with one striking addition being the following: “The fact that this song fits the government of most countries around the world is terrifying” … when will things start to feel a little brighter? 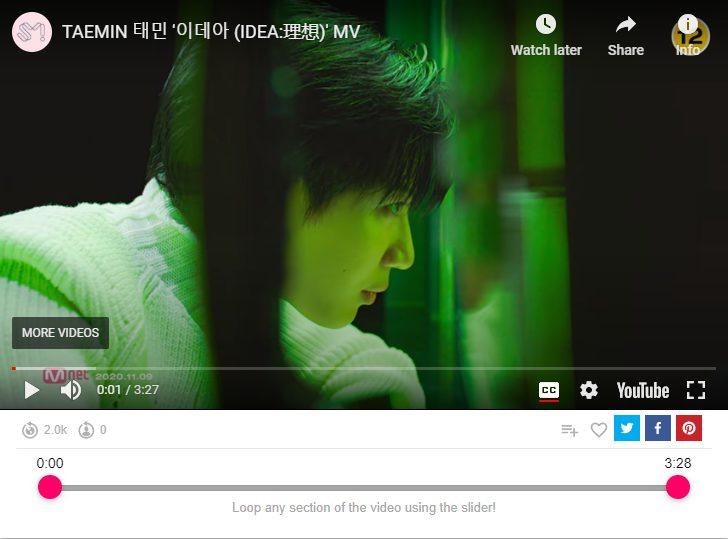 Taemin is fast becoming a fan favorite on the K-pop scene. His new track “Idea” is already on 6 million views after only one day and the comments sections are full of people talking about just how talented he is: “Name a better dance performance this year. His only competition was him and he outdid himself. I seriously get goosebumps watching this.” It is a spectacular performance indeed, one that sees Taemin change costumes several times and work tight choreography in an array of different settings.
It is rare to see a solo artist releasing such a video. True, they do exist in K-pop, despite the prevalence of groups, yet most of their projects look quite different – they are more toned down and pensive. Not Taemin; faceless backup dancers have been brought in to add texture and dynamism, but in effect he is a one-man-band, bringing enough energy to fill the screen himself. Here, we see him at a poker game, in the forest, at a plush bar, and also sitting behind prison glass, to name just a few locations, each one as eye-catching and thought-provoking as the next.
It is this aspect that brings interest to “Idea,” and also what makes the song a real grower for listeners. The number of different moods packed into the song is impressive, and its different stages – beyond just verse, chorus and bridge – keep you on a constantly shifting journey. A moment that encapsulates this is the violins that play on the chorus: two notes that dive down the scale or jump back up, sounding unhinged and deranged, offering a certain madness. It is a track that will attract American listeners for sure, and we can expect to see much more of Taemin.
GFRIEND (여자친구) ‘MAGO’ Official M/V 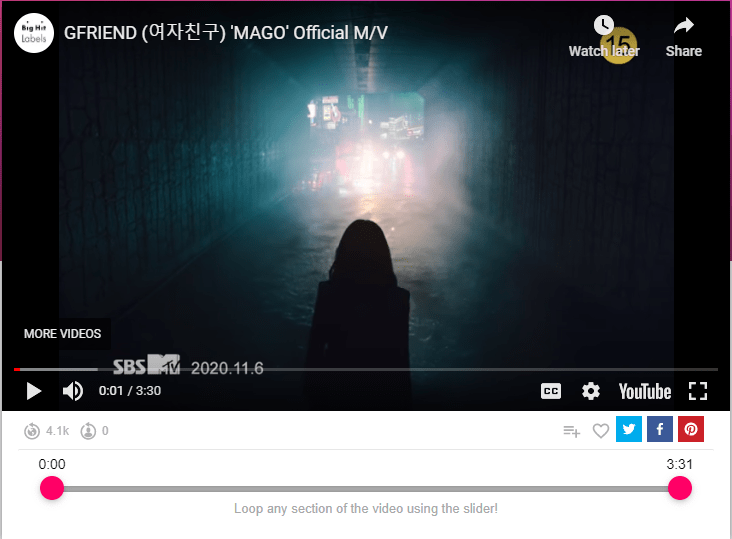 “I feel bad for K-pop fans who do not know Gfriend. They don’t know what they are missing” …so reads one top comment on the new video for “MAGO.” Indeed, there are not many people who don’t know Gfriend by this point, as evidenced by the 5+ million views on the first day of the release of this new track. The group is composed of six members – Sowon, Yerin, Eunha, Yuju, SinB, and Umji – and they were put together by the Source Music group back in 2015. This year has seen them release their 9th extended play and their third studio album.
“MAGO” comes at a time, therefore, where the group is well-established and at the top of their game. But they are also branching out, like so many K-pop groups, into subgenres. We have seen funk-inflected K-pop, the 80s, and more. This time, Gfriend has taken the disco route, and in keeping with the retro theme, they are taking it back to the dance floor. The video revolves around a night out and we see the girls getting ready as well as enjoying themselves in the club. Disco-ball lights and outfits fit for the 70s: the video really goes for the theme, which adds to its power.
It is the chorus hook that really stands out, with the lyrics “my heart is beating for you” ringing out in English. It sounds like a classic disco song that we’ve all heard hundreds of times and it has that sheen of quality that will ultimately lead to its success. A million miles from the cheap interpretation of a genre from a different era, let’s hope that this retro wave continues in K-pop because the set pieces are proving to be rich terrain and fans keep getting new and exciting videos as a result. 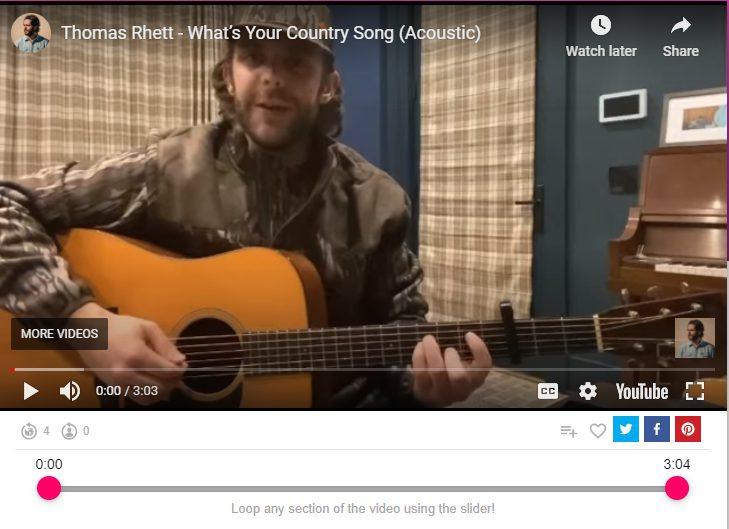 It is a charming live performance format that Rhett chooses to deliver his new track, “What’s Your Country Song.” And it is just as well, for this new song is about exactly what it is: country songs. As Rhett has realized, one of the main things country music does is soothe its audience, offering visions of a simpler world, where values were shared by all and the clarity of God shone down. This sense of comfort is what a lot of people seek when they listen to country music.

As the lyrics rightly state: “Everybody got a small town anthem/ everybody got a story to tell/ everybody got a hallelujah/ everybody been through a little hell.” Indeed, it is country music that acts as the soundtrack to many listeners’ personal stories, with its simple, powerful method of delivery, and Rhett poses the question: which song strikes a chord with you … What’s your country song?

It has clearly hit home with listeners, who give their own answers in comments sections, as well as revealing quite personal anecdotes and memories: “Aw honey that’s both of us running down the highway knowing all the love we have in our heart as we both go down the highway always I love you baby.” It is not untypical for country music to prompt comments sections like this, but Rhett has certainly been better than most at eliciting strong reactions from listeners.

On Twitter, the artist placed his song in context and released the following statement for his fans: “This year has taught us all how to slow down, it’s reminded us of our roots and has shifted our perspectives. A lot has changed but a lot has come full circle for me and my music. Excited to share “What’s Your Country Song.” 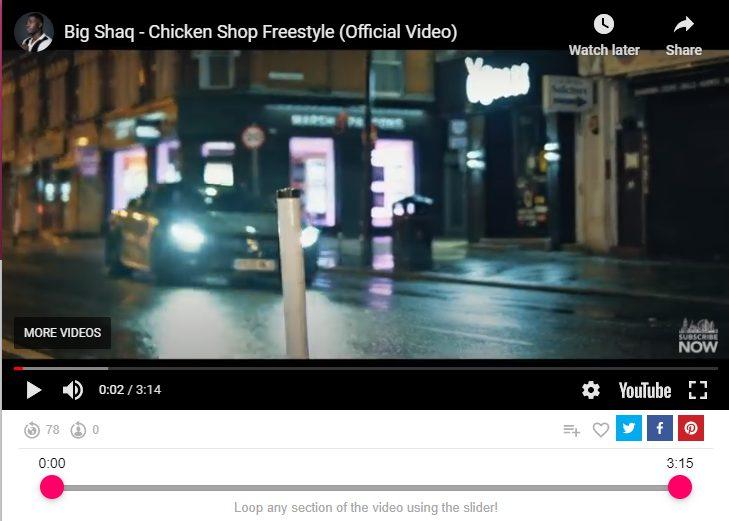 A king of comedy in the UK, a niche reference point in the US (loved by the likes of DJ Khalid), Big Shaq is an enigma to older generations. His internet stardom comes from comedy based on inner-city life, and on the ‘roadmen’ of London – youngsters are normally seen in large black coats in public spaces, according to the urban dictionary. Yet, the notion of the roadman has become a culture in and of itself in the last decade, and Big Shaq is one of the artists exploiting and revealing the funnier side to a demographic demonized in the media.

His track “Man’s Not Hot,” released in 2017, has gathered nearly 400 million views. It is a revelation and catapulted Shaq to the top of the comedy music game. Since then, the releases have come in with regularity, but none have reached the heights of that initial hit, not even “Man Don’t Dance,” released the following year.

“Chicken Shop Freestyle” is his latest offering, and it nods to a segment of London Youtube culture that is centered around chicken shops, a seemingly ubiquitous phenomenon in the city. The video includes the likes of Chicken Connoisseur, who rates wings and burgers around the city, and Chicken Shop Dates, a dating show where rappers and media personalities are taken for a bite with the shows dry host, Amelia Dimoldenberg (who features in “Man Don’t Dance”).

It is less overtly funny than some of Shaq’s previous work, but it doesn’t suffer as a result. Big Shaq is a good rapper, believe it or not, and he understand the key to making good comedy songs, according to Ricky Gervais: they have to be able to stand up on their own as tracks, rather than just jokes set to music.

Fleet Foxes – “Can I Believe You” (Official Video) 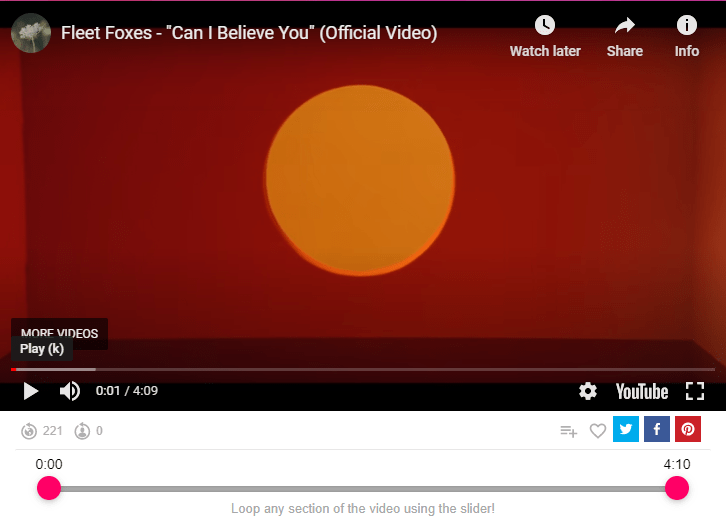 There are a few folk bands in recent history that have broken through their niche and made it, to a greater or lesser extent, into the mainstream. In the UK Mumford and Sons were the best example, becoming a veritable pop group by their heights, and in the US it was Fleet Foxes, though they have been much more elusive. With Robin Pecknold at the helm, their debut album, The Fleet Foxes, made waves back in 2006 and the group went from Seattle to speakers and iPods all over the world. This was followed up by Sun Giant, another self-titled album, and Helplessness Blues back in 2011. Then the group disappeared for six years, and have been getting back into things since 2017.
Their music is simultaneously delicate and powerful, and the melodies, which give the impression of being hundreds of years old, hit you with a freshness that lasts. One listener summed up the general feeling of fans in comments sections: “I’m so glad this band is back with a new album. I was introduced to them by my son going back some years ago. I fell in love with their music and I’m so glad they’re back with some new material. Welcome back Fleet Foxes.”
There is more than a hint of Tame Impala in the texture of this track, as well as the sound of the voice. But the subtle guitar riffs and the chorus of harmonizing singers let you know that it is a Fleet Foxes track. “Can I believe you?/ Can I believe you?/ I want to need you” –  the track also has an unsure speaker, which translates into more uncertainty in the song’s bride, that intentionally uses off-notes and a completely different sound palette. It is masterful, thought-provoking, and quite majestic once you get into it.
1 Shares:
Share 1
Tweet 0
Pin it 0