Music cannot remain silent. When music roars there is nothing but that particular music weaving its way into your soul. It’s a divine way to beautiful, poetic things to the heart. It’s believed good music helps you focus and concentrate your mind on something. Even with everything going on right now with the virus, new music hasn’t stopped coming out. What more can a music lover ask for? ListenOnRepeat presents you with new music and their exclusive reviews below. Take a look! 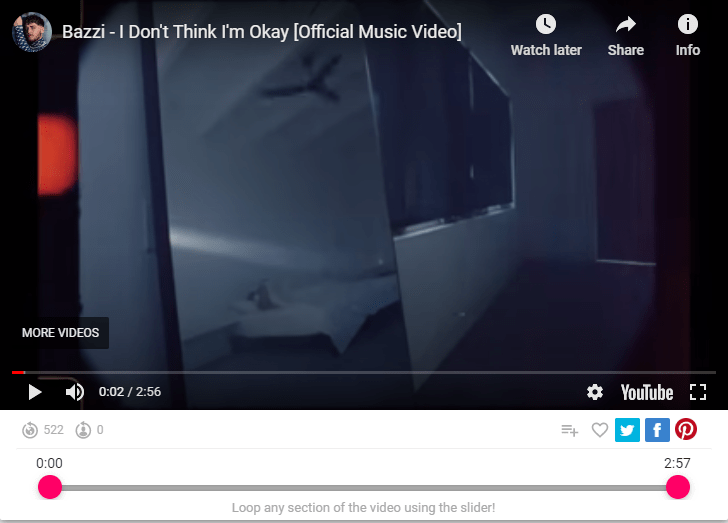 There is a sense that “I Don’t Think I’m Okay” is different from the other songs released by Bazzi, the American singer from Michigan whose song “Mine” went viral on Tik Tok, catapulting him to levels of fame that wouldn’t have likely come around otherwise. “Beautiful,” too, was a track that showed off Bazzi’s falsetto, earning popularity with its opening lines that offered gems like “the way that Gucci looks on you amazing.” Whereas “Mine” was an upbeat lo-fi pop track that reveled in positive themes like beauty and acceptance, and “Beautiful” followed similar lines, “I Don’t Think I’m Okay” takes a more insular approach, directed more towards self-love and the difficulties and obstacles that come with it along the way.
A top comment on the official video describes the fan reaction, quoting the lyrics that had a particular impact: “I don’t want nobody to see my ugly heart, to see my ugly scars” that’s just so sad and hits real hard :/.” For an artist who has focused on outward appearance in his biggest hits, this new track will seal the greater connection with his fanbase, showing vulnerability and poise on themes that are more complex and fraught than anything he has taken on so far.
Visually, the video is framed by a vintage look, suggesting nostalgia and memory, while muted tones describe the depression that is being hinted at through the lyrics. The mood is set from the very first line, where Bazzi speaks of his family, and of how he hasn’t seen them in over a year. Yet there is a twist in the tail: even when he does see them, he isn’t really there. It is this kind of creeping, difficult-to-describe, an off-kilter mood that characterizes the track, and it has clearly chimed with the way listeners feel about their own lives
Watch Bazzi – I Don’t Think I’m Okay [Official Music Video] 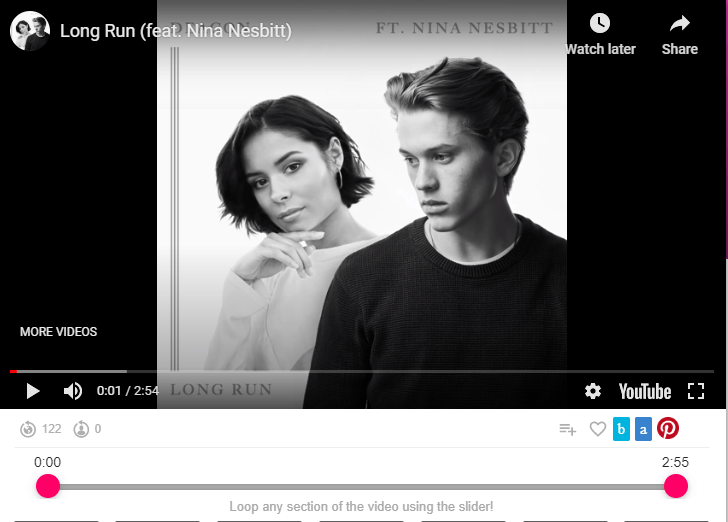 There is a familiar opening chord sequence to “Long Run” by Deacon. It is the kind we hear in pop ballads, plucked out on a delicate acoustic guitar, soon to be joined by drums, synths, and vocals intertwining over a chorus that rises into an emotional crescendo before crashing down back to earth and into the next verse.

Who is the artist behind this effective, well-crafted, though admittedly pretty formulaic track? The answer is Deacon, the son of Reese Witherspoon and Ryan Phillippe, both heavy-hitting actors. The 16-year-old has been interested in music from a very young age and apparently, he’s been honing his craft for a good few years, with enough vision to have begun in the 7th grade.

His parents’ names will have helped to get this song in front of people, yet once he is there he is required to impress on his own. It seems that Deacon is cut out for success – he is trending right now, and the music industry has never been more democratic and organic, with online traffic-driving success more than anything else. It is safe to say that Deacon has enough talent, but the key will be collaborations over the next few years.

For “Long Run” he has teamed up with Nina Nesbitt, the Scottish singer-songwriter who’s 2014 single “Don’t Stop” featured in a John Lewis advert in the UK and subsequently charted quite highly. It was a cover of Fleetwood Mac, but it showed Nesbitt’s tone and character and endeared her to a large fanbase. Together with Deacon, she has conveyed that same energy, and it is going down very well with fans.

Judging by her reaction on Twitter, she didn’t expect the song to go so high on iTunes charts. That is star power for you, but to be fair the song isn’t bad either.

Chris Tomlin – Who You Are To Me (Lyric Video) ft. Lady A 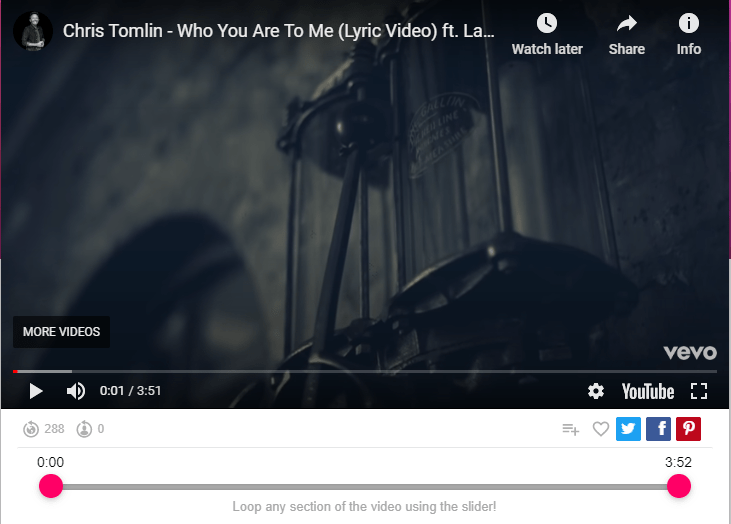 Chris Tomlin is an anomaly in the music industry. Why? Because he is insanely popular despite a white Christian slant. Yes, there are country singers who deliver their lyrics to the heavens often, but Tomlin’s expressed aim is to praise the Lord and convert/ deepen the faith in his listeners. Signed to EMI’s sixstepsrecords, he is one of only four Christian rock singers to achieve Billboard number ones, and some of his best tracks demonstrate the tone he delivers: “Our God,” “How Great IS Our God,” “Good Good Father,” and “Whom Shall I Fear (God of Angel Armies.” You get the idea.

It wouldn’t be strange, at this stage, to think “this music can’t be for everyone.” Yet, Tomlin has won Grammys and consistently sees his albums go platinum. In fact, his music is so widely known, in churches and beyond, that Time magazine has stated that he might just be the most often sung artist anywhere in the world. Quite the force to be reckoned with, therefore, and those who are not in the know should do themselves the favor of pressing play.

For this new track, “Who Are You Yo Me,” he has joined forces with Lady. A the country-pop group formed in Nashville, Tennessee. Together they work up a love-letter to God, the savior, and the protector. They provide testimony to his power and love, despite the fact that some people just see him as “words on paper.”

On Twitter, Tomlin reflected: “I loved working with Lady A on this song. Each new track on my upcoming album features a friend of mine coming together to talk about faith and God. Keep a lookout for the full album on July 31st.”

Watch Chris Tomlin – Who You Are To Me (Lyric Video) ft. Lady A 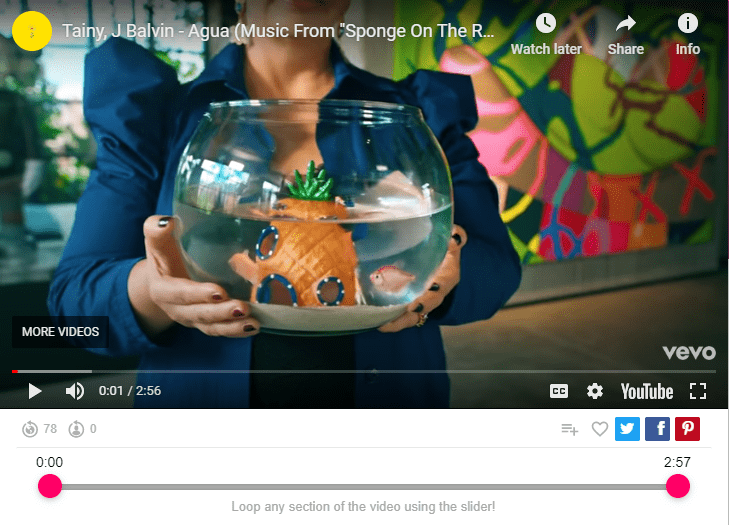 After the first few seconds of this new track, when the familiar chord sequence comes in, viewers of a certain age will immediately recognize what they are hearing: “Who lives in a pineapple under the sea…” come to the words from a gruff voice. Spongebob Squarepants is an American series that tells the story of a yellow sea sponge who loves being a cook at Krusty Krab restaurant, an eatery situated in the heart of the Pacific Ocean. With his cast of friends, he embarks on various adventures in Bikini Bottom. With an American slant to this show, it is interesting that producers have decided to enlist stars from the Spanish speaking world to perform on the soundtrack, though not entirely surprising.

After all, the Latin market is huge, both for music and cinema, and getting a slice of it makes all the difference to big-budget flicks. Also, we have seen how films like Trolls have teamed up with pop names like Justin Timberlake and HAIM to great effect. This project aims for the same thing, with a little international spice thrown in. It is an interesting gig for Tainy and J Balvin to take on … Spongebob Squarepants and Latin pop, who would have thought it? Yet, whoever did dream up the idea deserves a raise because the effect is perfect.

Overall, “Agua,” which means water in Spanish, is about as good as it possibly could have been. From the word go we are at full-throttle, bouncing along to a beat that will cause dancing in both adults and children alike. It’s all in aid of the upcoming movie Sponge On the Run, but it could equally play out in bars and clubs. A feat of production that really meets the brief – the beat even employs an underwater effect at key moments. 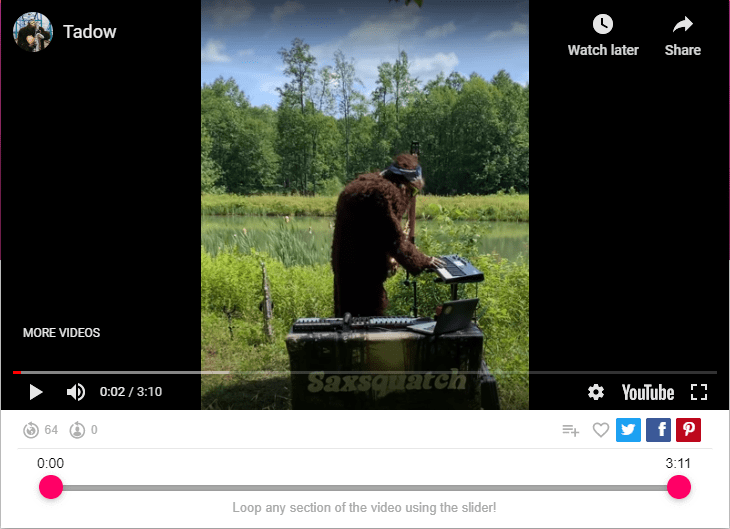 The Sasquatch Youtube channel is a pretty simple concept. A multi-instrumentalist, whose specialty is clearly the saxophone, stands in a field with a river running behind him, or in front of a luscious woodland and blasts out sweet music whilst dressed as the Sasquatch or Big Foot. This time he has taken on “Tadow,” a modern viral classic originally concocted by FKJ and Masego during a jam session at the Red Bull Studios in Paris. It combined computers, vocals, piano, and, of course, the saxophone, to create an ear-worm of a hook that has been famous ever since. Hence, there is no need for a more elaborate title. “Tadow” is all that is required, and fans will immediately know what they are in for.

Due to the multi-instrumental nature of the track, the Saxsquatch as expanded beyond his main instrument, employing keyboard, loop pedals, and electric upright bass to create the same sound that FKJ and Masego made famous. Indeed, anything less wouldn’t work out so well. Yet, he does improvise over the melody, making his own version of the piece in the process. With no vocals he lets his saxophone lead the way, taking the tune off down several tangents before bringing it back to that one central hook that we all recognize so well.

It has been the season of regular uploads for the Sasquatch, with pretty much daily videos appearing on his channel. This one has garnered more views than most but that is to be expected. Indeed, summer is here and this creature needs to be outside to perform. After a long period of confinement, you get the sense that the artist is determined to make the most of the newfound freedom, growing his following and playing against the sky (Sonnie Rollins style) in the process.