Top Songs of the Decade

2000 seems like it was ten years ago. Weren’t you only a child watching the Ball Drop live on TV with drowsy eyes not so accustomed to waking until midnight? Your cousins, nieces, and nephews born after 2000 are on the cusp of teenage years—all ready to embrace their 20s. When did time fly so fast? How?

The 2010s are ending. As we bid goodbye to the world-is-coming-to-an-end theory from 2012, UGGS, Jersey Shore, and Harlem Shake, it’s only natural to feel this wave of reminiscence. RIP Harambe. It’s not only us—brands and businesses across the globe are playing their homage to this iconic decade in their terms. It is no different for the music industry. Big shots like YouTube, Spotify, and Apple Music are all releasing data on most-streamed music and artists of the decade, how genres fared and failed, and what songs made it to the top.

In this blog, we will list our pick of the most viewed music videos of the 2010s decade according to YouTube views! So, get ready to go down on the nostalgia train!

American rapper Wiz Khalifa’s See You Again, featuring Charlie Puth, rules at number one with 4.3 billion views. In 2017, it was ruling at the top spot. The song was commissioned for the soundtrack of the 2015 action film Furious 7, as a tribute to the late movie star Paul Walker. The hip-hop and pop-rap ballad also enjoyed 12 non-consecutive weeks atop the US Billboard Hot 100. Although it landed the third position on YouTube, it has a whopping 7.6 million views on LOR with most viewers from the Philippines! 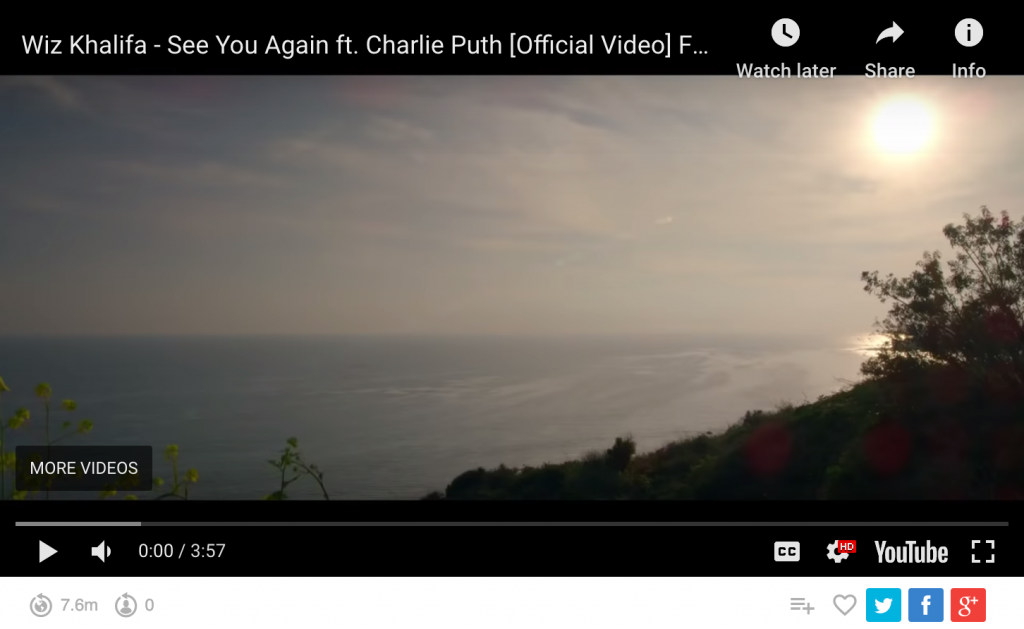 Justin Bieber’s 2015 hit, Sorry, has made it to the second position with 3.2 billion views—giving a very close competition to PSY. With dancehall-pop, moombahton and tropical house tunes, the song lyrically translates to a plea for redemption. On a commercial scale, the song topped the charts of over 13 counties. Alongside the catchy tunes, the song’s success can also be credited to the music video featuring a global dance crew. The song has bagged 4.7 million views on LOR alone, with most Beliebers hailing from Malaysia. It even has a 97% addiction rate, making it song of the decade. 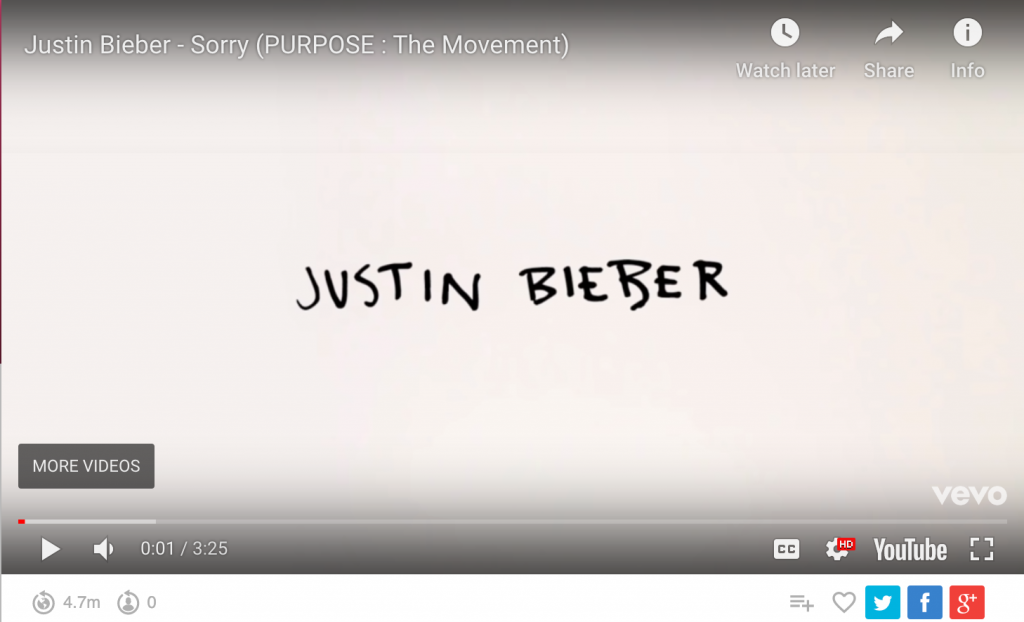 Released in 2015, Maroon 5’s single from the fifth studio album, V, is still creating ripples in the YouTube world 4 years later. So far, the song has amassed 3 billion views and is ranked at number three. Commercially, the song went on to become the 68th song in history to score at least 20 weeks in the top 10 of the Hot 100. The song’s music video, which features Maroon 5 crashing weddings, gained critical and commercial acclamation. The music video has been watched on repeat on LOR for more than 1.7 million times, with once again most viewers hailing from Malaysia. It has scored a sublime 87% in the LOR popularity chart. 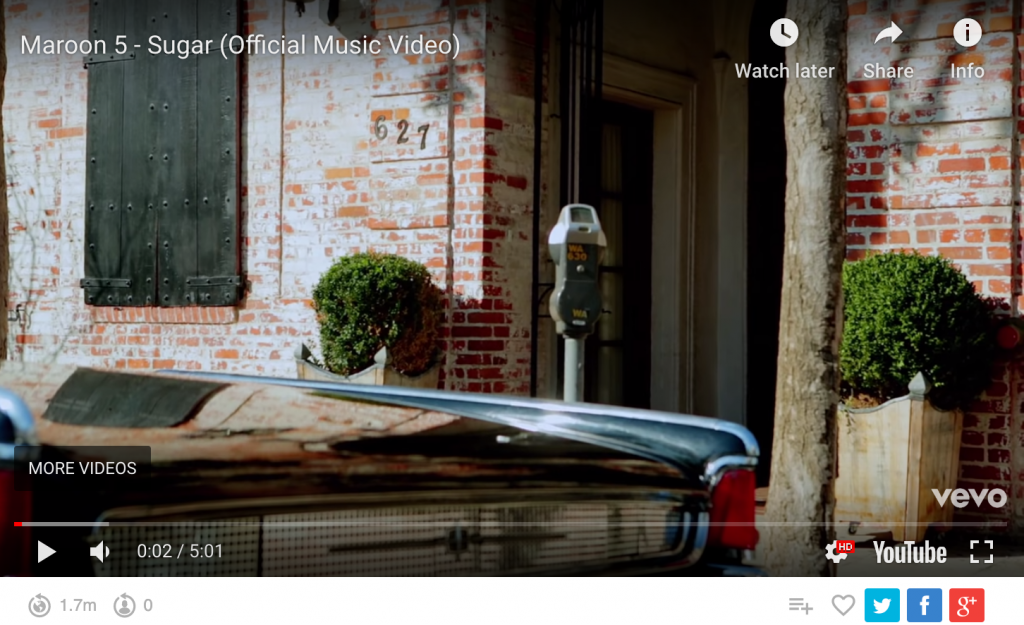 At number four is American pop star Katy Perry’s hit single, Roar, with 2.9 billion views. The song created history when it was used as the campaign theme for Hillary Clinton in 2016. The song was critically acclaimed for its ‘easy poppy beat’ and ‘repeated refrains’. The female-empowerment song was a huge commercial success, as it topped charts in 12 countries including Austria and Australia. Upon release, the song’s music video was praised for its multi-sensorial, jungle-themed graphics. At 985.1k repeats on LOR, the song is now very close to its landmark 1 million views! 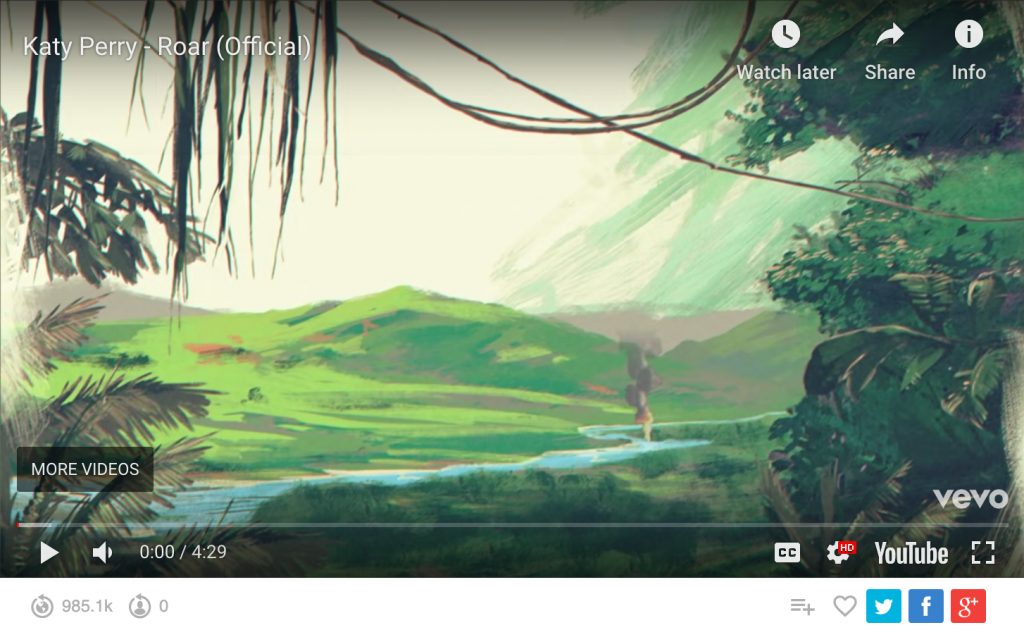 Taylor Swift – Shake It Off

This hit single by American powerhouse, Taylor Swift, has sublimely clocked in at number 5 with 2.8 billion views. This upbeat, dance-pop song is considered to be a highlight of the Grammy-winning singer’s career as it marks a departure from her country-pop music style. After debuting at number one on the Billboard Hot 100 chart, the song went on to earn numerous awards including a Grammy! On YouTube, it is the 13th most viewed song of the decade, while on LOR, the song has scored over 2.5 million global repeats. The LOR popularity chart shows it’s most popular in Finland and has a 79% addiction rate. 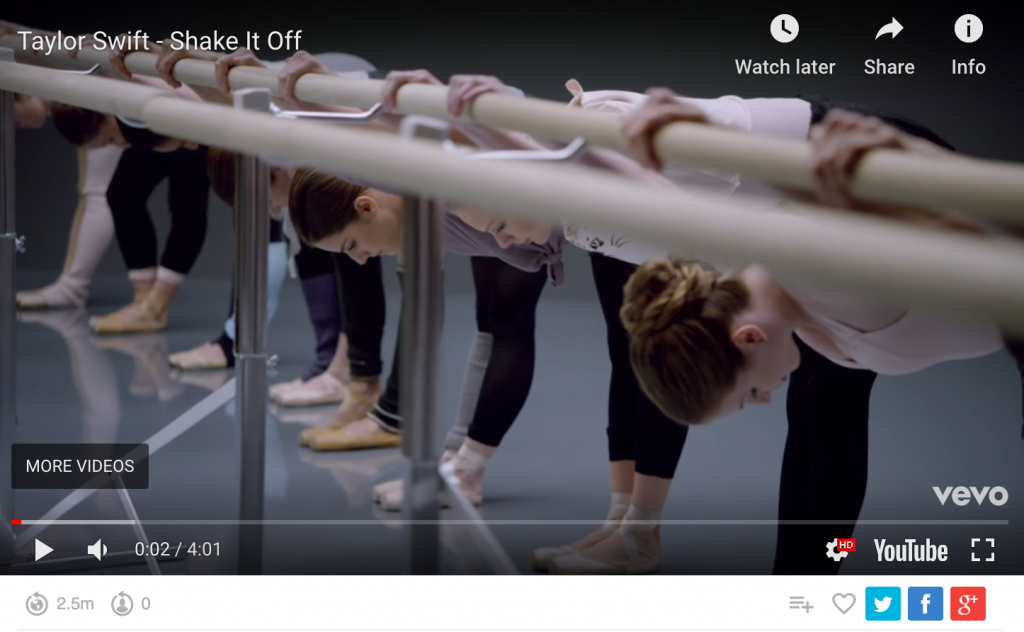 The catchy Spanish number by the King of Lain Pop has been placed at number six. It is also the only Spanish song on our list today. With a whopping 2.79 billion views, Bailando, which means ‘dancer’ in Spanish, proves that language is no barrier when it comes to good music. Even though most of us only know two a word or two of the song, we all agree that it has an unforgettable beat to it. The song has been played over 700k times on LOR alone, with most listener hailing from Austria. It has also been favorited by over 1,300 people. 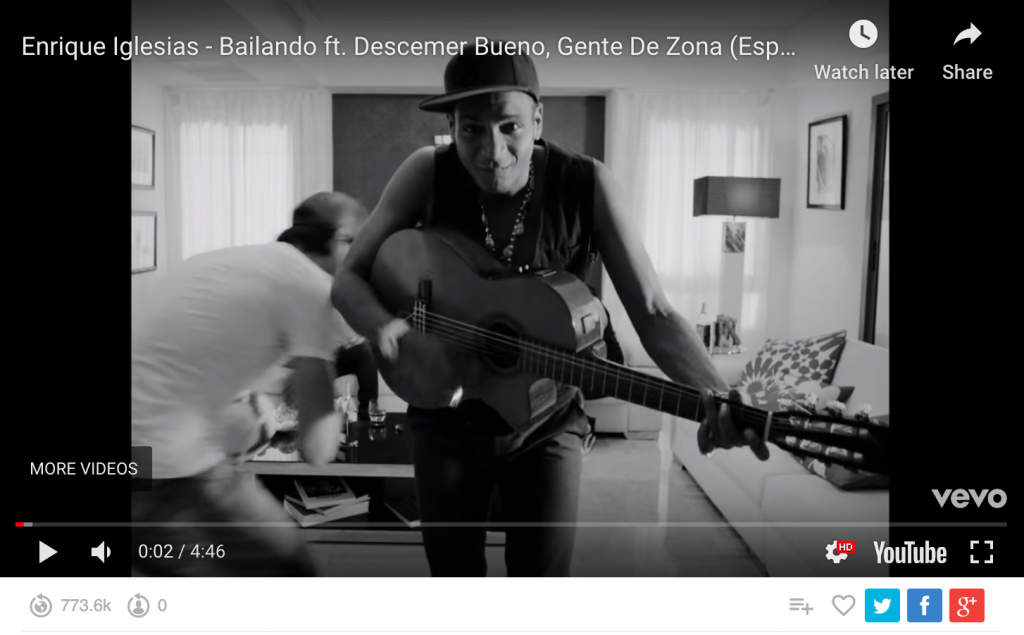 It won’t be wrong to say this tune by Jamaican-American electronic dance music group Major Lezer is one of the most recognizable and defining songs of the decade. Released in 2015, the song has accumulated over 2.7 billion views on YouTube and is the seventh most popular song on our list. The song reached number one on charts in over ten countries and is one of the most-streamed songs on Spotify as well. Even more impressive, it is one of the songs with the highest number of global repeats on LOR. The song has amassed unbelievable 10 million views. That’s the personal best for Major Lezer so far! 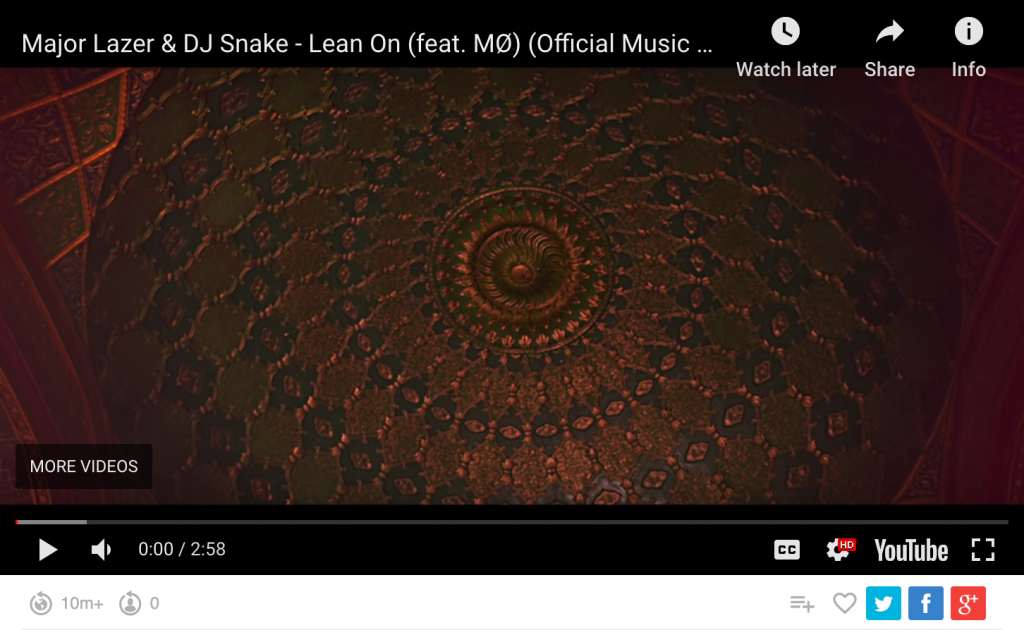 The second single by Katy Perry on our list tonight, Dark Horse has landed a position at 8th position with 2.6 billion views. Released in 2013, the song combines genres of hip hop, trap, pop electro, and pop. The song tasted huge commercial success, soaring at number one in the US, Canada, and the Netherlands. With several Grammy nominations, the song sold 13.2 million units in 2014, becoming the second-best song worldwide for the year. On LOR, Dark Horse enjoys 1.7 million global repeats with a 100% addiction rate. 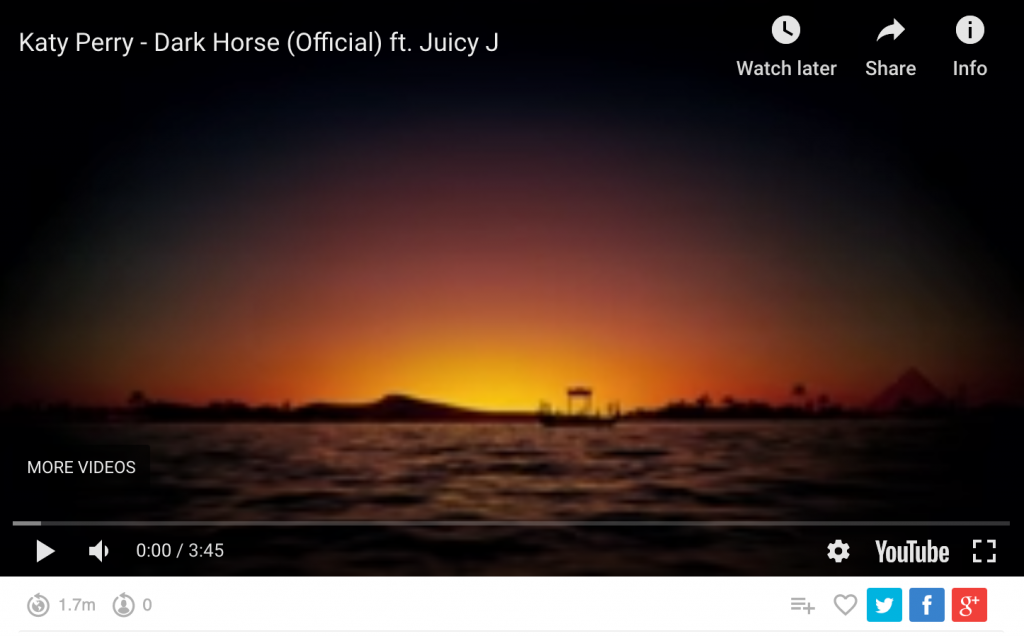 Meghan Trainor – All About That Bass

The dream debut by America singer-songwriter, Meghan Trainor, All About That Bass has raked in 2.3 billion views on YouTube since 2014. The song, which incorporates the 1960s music and themes, was lauded instantly after release for its body inclusivity message. The song enjoyed eight weeks atop the Billboard Hot 100 in the US and several Grammy nominations. It sits at the ninth position on our list for the decade. The song has an impressive streak of 1.4 global repeats on LOR as well. The popularity chart shows that It is most popular in the US with females and has a 100% addiction rate! 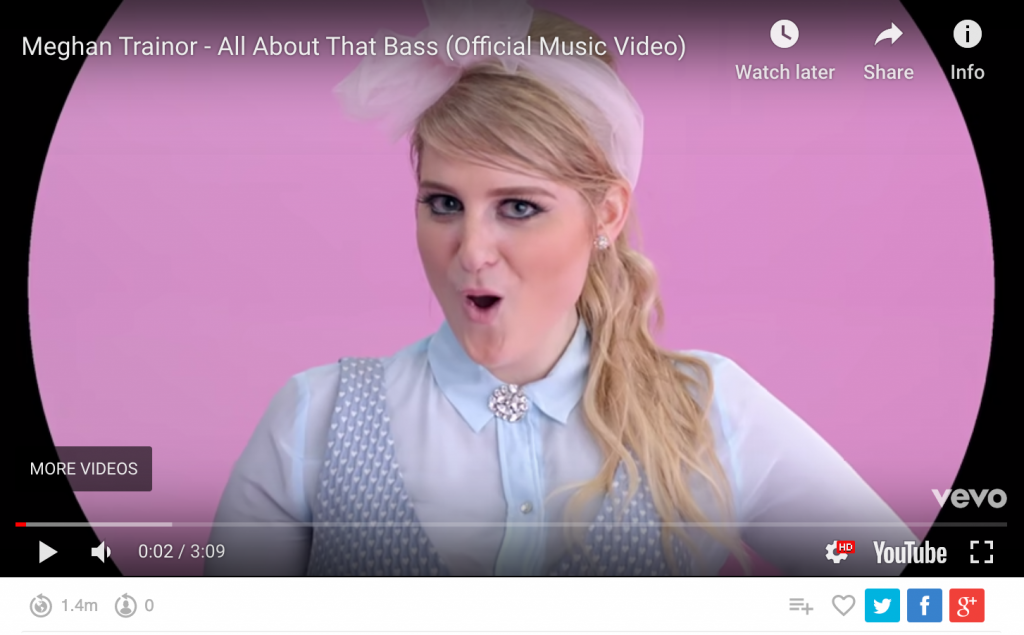 Calvin Harris – This Is What You Came For

We conclude our top ten with this electronic dance music (EDM) song by Calvin Harris and Rihanna. Following the release in 2016, the song has gathered 2.2 billion views on YouTube alone. It also peaked at number one spot on US Billboard Hot 100 and became Harris’ highest peaking single as a lead artist. On LOR, it has over 1 million views and is favorited by 3,000 people.

So, now that we have completed the list, head over to LOR to listen to your favorite song of the decade. From creating multiple playlists to finding insights on songs, from connecting with like-minded music lovers to discovering new genres, there are so many more LOR offers than just playing a song on the loop.