ListenOnRepeat Most Repeated Songs of September 2020

With many songs releasing every month even in these times of pandemic, the music industry has played a good role to keep us entertained while we are bound to stay at home. As of September hundreds of thousands of songs were played through ListenOnRepeat and we have created a list of the most repeated songs of the month.

Most Repeated Songs of September 2020 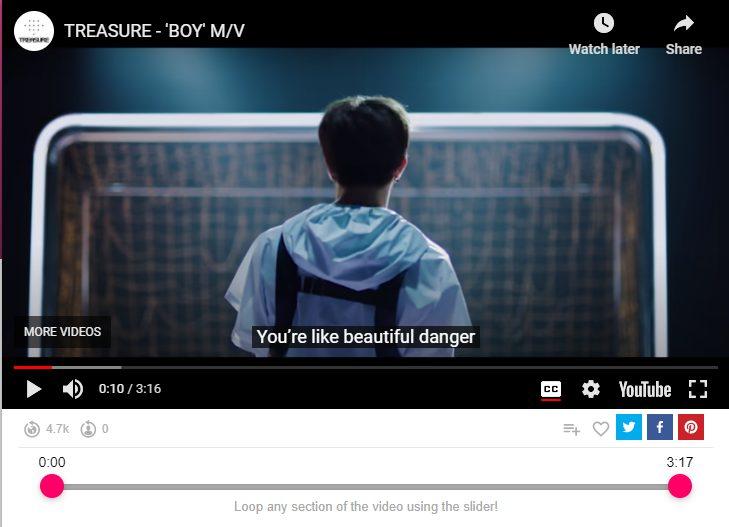 Korean boy band Treasure is one of the most awaited debut groups of 2020 and they certainly have left a cool aesthetic charm on everyone. Previously known as Treasure 13, Treasure had 13 members including the leader Huynsuk, Yedam, Jeongwoo, Junghwan, Doyoung, Asahi, Jaehyuk, Jihoon, Yoshinori, Junkyu, Haruto, Junkyu when Ha Yoonbin left the group on December 31st, 2019 to be a soloist as YG Entertainment approved the termination of his contract.

Treasure’s 2020 debut comprises of two songs: the first most anticipated track, “Boy”, and side release “Come to Me”. Regardless of the arguments about EDM breakdown, the song is quite catchy and YG never fails us on classic style music videos. The Treasure fans are delighted to have them back and sad for not being able to see Yoonbin. 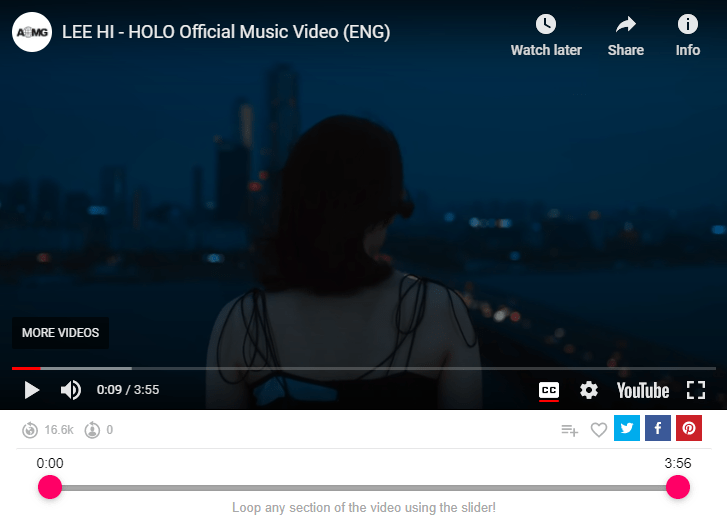 “HOLO” begins with the wind rushing as a woman stands precariously on top of a building, tipping forward slightly. We then cut to a feather falling softly against a blue sky, and an equally serene voice comes in. Lee Hi’s new track is balanced between serenity and danger and flicks between then as it does time zones and languages. Her move to AOMG has seriously good connotations for fans. Here’s the thing: unlike labels like YG Entertainment (where she was before), AOMG is a group that pushes its artists creatively, and releases music that challenges genre instead of purely focuses on commercial gain. Also, artists can release music more regularly, outside of huge, international touring structures that are demanded every release by the major outlets.

Nostalgic style with R&B padding that allows for the subtleties in HOLO’s voice to come through and take center stage. There are strings in the background, electric guitar, future synths, and a whole lot more. This is a song with a lot of variety, plus the vocals which shift and reform the tone every couple of lines. It would be the perfect track to show people how K-pop is more than just groups of choreographed dancers and big set pieces. 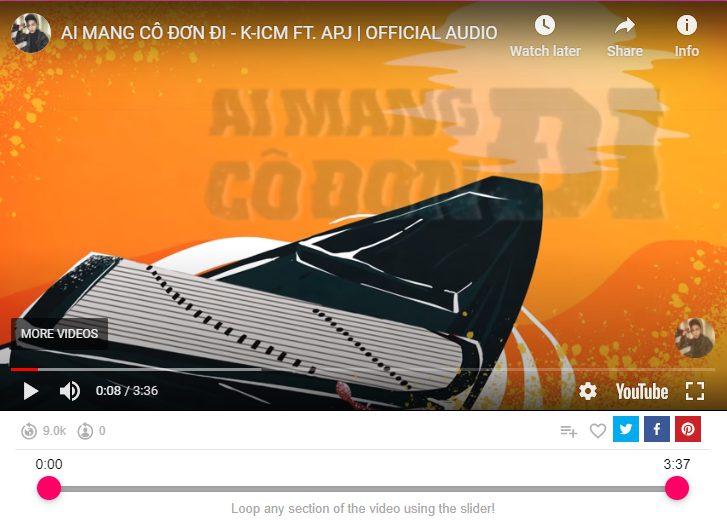 With the new song combined with singer APJ, music producer K-ICM plays the main music video, recording in the romantic and intriguing landscapes of the coastal city of Da Nang. AI MANG CÔ ĐƠN ĐI, Released on September 30, 2020, by K-ICM and APJ has received a lot of praise from the audience. The compliments haven’t stopped coming and why would they when lyrics are so amazing and extraordinary.

You can feel the pain in his voice when he said “I have loved you even though I try to smile but… Every night burying loneliness silently carries traces… Thousands times of soul stone, life sprouting, and me…” 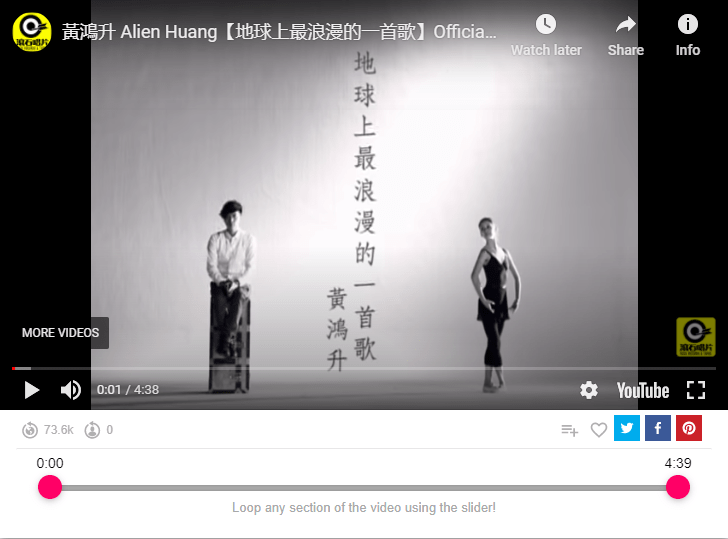 Alien Huang truly dedicates the song to his love through his opening lyrics “If I guess I lose this time, will I be disqualified by God from loving you”. As the title itself says “The most romantic song on earth”, it indeed is one of the beautifully written songs and the sweet voice of Alien Huang makes it even more mesmerizing.

The official video was released on Nov 28, 2011, and it has over 77k repeats on ListenOnRepeat with a couple of hundreds of repeats of my own. Even if you don’t understand Chinese, listen to it once and you will fall in love with it. 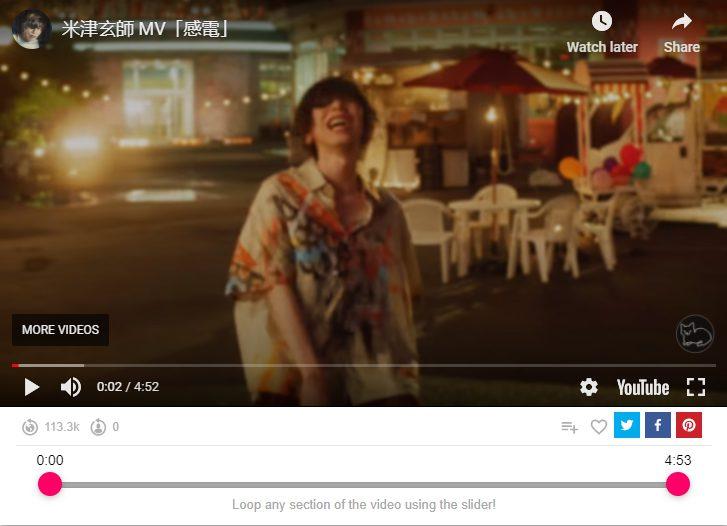 Kenshi Yonezu’s ” Electricity ” MV achieves 10 million plays in just 4 days and 7 minutes of its release and has over 100K repeats on ListenOnRepeat. He released MV for Electricity on “MIU404”, a TBS Friday drama on June 26, and later it was released on YouTube on July 10. Yoshiyuki Okuyama directed the music video with his humorous idea behind the video and undoubtedly it has captured a lot of attention. The symbol “404 NOT FOUND” message with morse code = “Mails Signal”  was charming just before the release of the video.

The MV has a powerful opening and expressions of Kenshi Yonezu are very rich. The music video starts with Kenshi laughing so loudly. After that when he takes the cat’s hand appealing the camera, sticking his tongue out, putting his hands on the cheek was quite amusing and the panda car ride was funny. The song keeps on these activities until the total playback time of 4:52.

YOASOBI – Racing Into The Night (16K) 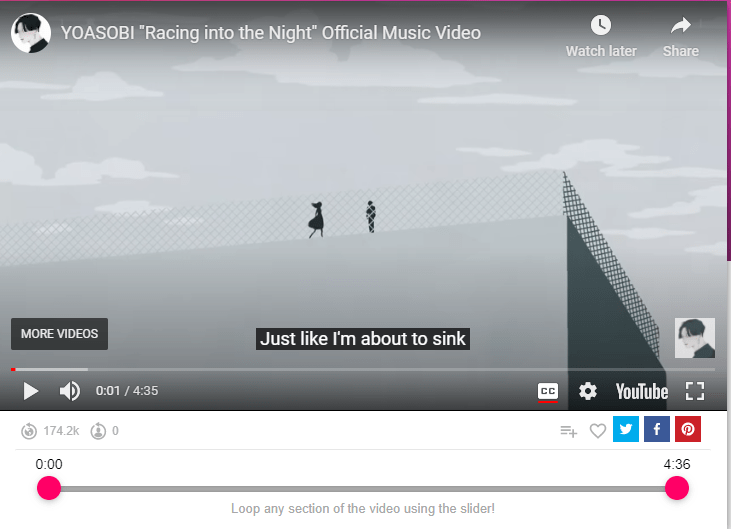 The song is based on “Temptation of Thanatos”, a short story by Mayo Hoshino which was released online in the summer of 2019. The story begins with an alone man living in an apartment working at a labor company. He gets a message from his female that she is going to kill herself. When he rushes to her home, he sees she is on the top of a building ready to jump. He stops her and explained this is the fourth time she has tried to kill herself. The MV “Racing Into The Night” implies this story in a beautifully written lyrics and the amazing voice of Yoasobi. 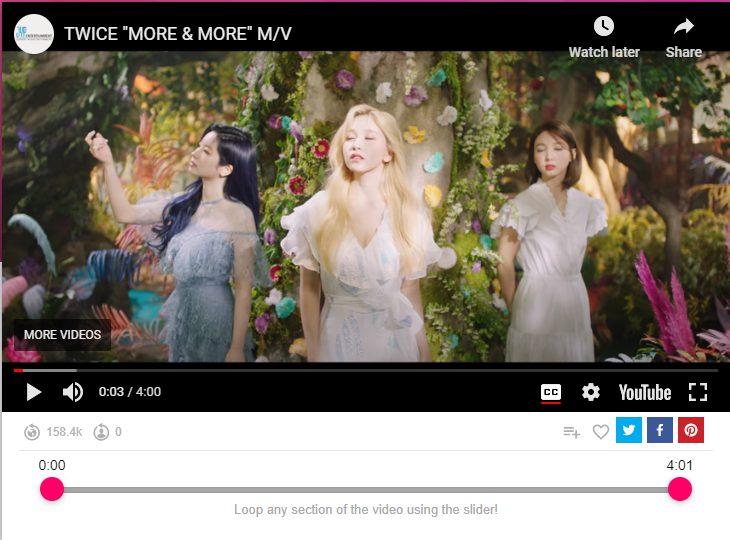 Twice girls are back with their latest release of mini-album “More & More”, one of the highly anticipated album after a long gap between their previous release “Feel Special” that came out last year on September 1.  Twice once again proves why they are the most phenomenal and K-pop’s leading face with their latest glamorous album as well as single More and more.

“More & More” is the title track for this new project and it is a vocal rollercoaster that goes through several changes throughout the verses. We get a techno bridge, and a pounding, ecstatic chorus. As in many K-pop hits, there are rap sections included and the dance/ performance element is of central importance. Of all their 9 mini albums, this one is being rated highly. Part of the reason for that is that the members of Twice have been taking a more active role in the writing and production of the music. The K-pop music machine is large and imposing, so it is good to see a story about artists reclaiming control and the music being all the better for it. 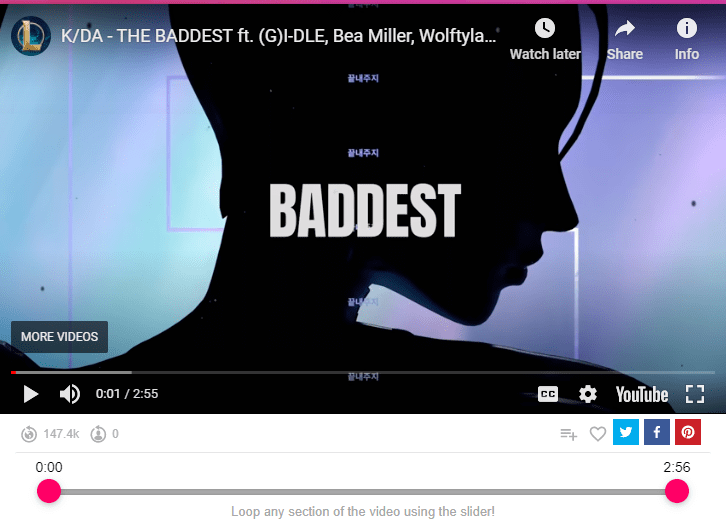 League of Legends’ virtual K-pop group K/DA released their new song “The Baddest” with collaboration with (G)l –DLE, Bea Miller, and Wolftyle. Riot Games once again proved how a K-pop track can provide more versatility to a game. K/DA has released only two songs yet so many references point towards it due to the catchy lyrics that give a sensation of wilderness while playing the game. Singing along is a little difficult regardless of a few English lyrics.

Every verse and chorus maintains a high tempo. The upbeats, echoes, and sounds and the dropping bars represent the heroes in League of Legends. The rhyme perfectly fits in The Baddest but the voices are fairly distinguishable comparing to the K/DA’s previous release. The song has nearly 150k repeats on ListenOnRepeat and over 22 million views on YouTube. 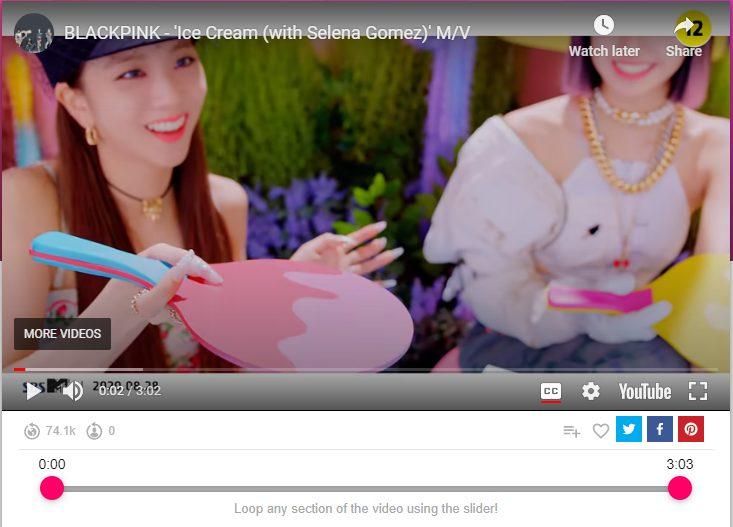 South Korean girl band Black Pink was formed in 2016 by production company YG Entertainment. It consists of four members who come from South Korea, Australia, and Thailand. Two of the members had prior experience, having been featured in various commercials and music videos of other artists of the same production company. The other two members were discovered through auditions. Their debut took place on August 8, 2016.

Blackpink girls are back again after their recent success with “How You Like That” with a new collaboration single, “Ice Cream” featuring American pop princess Selena Gomez. The pairing of Blackpink and Selena Gomez is quite good and MV delivers some dramatic melodic moments around the chorus. The lyrics are mostly English with few lines in Korean and the expression Selena makes is just lovely. Jennie and Selena’s vocals were sweet as sugar and how Jisoo sang those English verses is just stunning. Everyone loves over girl Lisa and her rap hits. The main vocalist Rose however didn’t get to sing more of the lyrics. I would have absolutely loved it if she had more lines on her part. 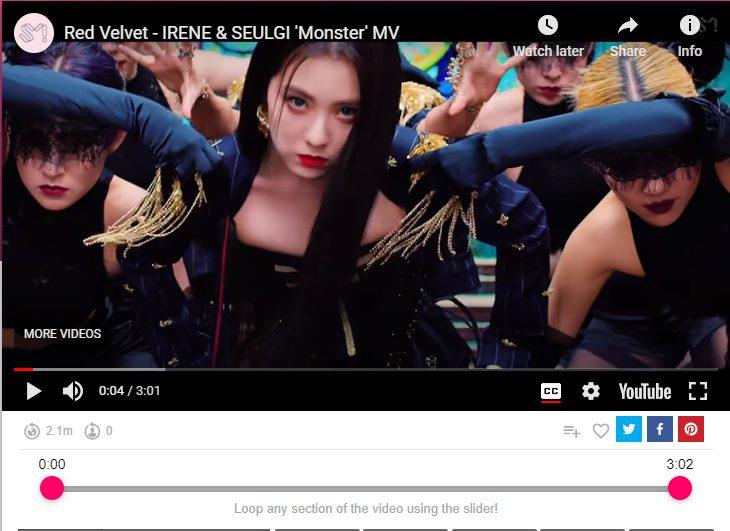 Red Velvet is a South Korean girl band formed under one of the largest production companies SM Entertainment. It consists of five members, some of whom had prior experience, having featured in music videos, TV programs, and musicals. The band’s official debut took place on August 1, 2014. Their current discography consists of one studio album, three extended plays, and eight singles.

K-pop group Red Velvet’s fans have to wait a bit longer for the release ofIrene and Seulgi Monster music video but it’s finally here. “Monster” has top-notch vocals from Irene and Seulgi along with some seductive elements.  The song starts with high pitch audio and the rhyme of ‘Na Na Na’ sets an awesome tone to the overall song. There are suspenseful verses, energized chorus, and dubstep that is unique and intriguing in some way. The chorus has melodic vibes but the repetition seems to be a little dull.